Rocky IV Returns to Theaters in an All-New Directors Cut! 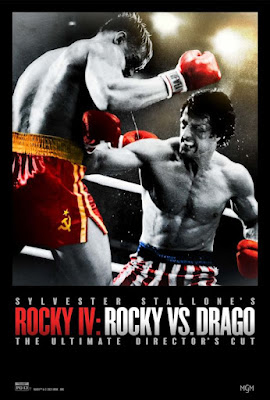 Retitled Rocky IV: Rocky VS Drago: The Ultimate Directors Cut, Stallone has re-edited the film, removing any scenes with the robot, adding an additional 40 minutes of never-before-seen footage (nearly an hour!!), and delivering a more dramatic and intense experience. As much as I absolutely LOVE Rocky IV (in all it's 80's montage glory) just the way it is, I'm also really excited to see what he does with this. Just watching the trailer, you're thrown into this new alternate experience because most of the footage seen is new!

The most triumphant sports-drama franchise in history returns with a new look in ROCKY VS. DRAGO: THE ULTIMATE DIRECTOR’S CUT. This live event is coming to movie theaters for one night only and includes an introduction and Q&A with Sylvester Stallone!  Director, Writer and star SYLVESTER STALLONE masterfully reshapes ROCKY IV, delivering 40 minutes of never-before-seen footage. With more intense fight scenes, world heavyweight champion Rocky Balboa (Stallone) defends his title once again, this time against Drago (Dolph Lundgren), a six-foot-four, 261-pound fighter who has the backing of the Soviet Union.

I've seen a lot of comments from people not understanding the logic of this, and while I can understand that point of view, I can also see it from Stallone's. As an artist, we're never happy. All we see are the things we want to change or the things we should have or could have done differently. And if you're actually in the position to make those changes, then why not?

Rocky VS Drago will be screening for one night only at Cinemark Theaters on November 11 via Fathom Events, and will roll out digitally to stream On Demand the following day on various digital platforms.

You can purchase your tickets via Fathom Events HERE.

You can view the kickass new trailer on YouTube HERE.