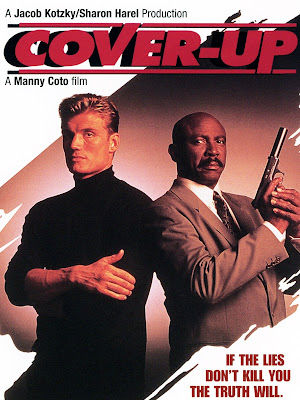 Sometimes you go into these little films expecting a mediocre little affair to waste some time, and other times you're surprised how good the film actually is, which is pretty much what happened here. Cover-Up is a film I've been wanting to see for ages, but just never got around to it. While it has been officially released on DVD for some time, in dreaded full frame, I still never got around to it for one reason or another. I just always meant to. But! That opportunity finally presented itself when The Punisher: The Untold Story of a Cult Classic author Jeremie Damoiseau let it be known that this film was finally given the HD and widescreen treatment and was finally available to stream via Amazon Prime. Sold! Let's dig in.

I knew going in that this was not going to be an action film. Basically all I knew, other than it was the second collaboration between Lundgren and Louis Gossett Jr. after The Punisher, was that it was a thriller, and it was directed by Manny Coto (Dr. Giggles, Dexter). What I wasn't prepared for honestly, was how good this was, and most importantly, how well made it would ultimately be. And that's an aspect that I'm sure not a lot of people put much stock in, but it's a huge deal to me. I notice. And that's an area where Cover-Up really shines. Director Manny Coto gives the film and it's visuals an aura of professionalism that you rarely see in these low-budget thrillers. I have to admit, on the surface, aside from an unnecessary nude scene, this could easily have been another run-of-the-mill Made-for-TV movie, because as Espionage Thrillers go, there's nothing really all that special about it. That's why things like impressive camera setups, solid editing and a professionals touch really go a long way with these types of films. Aesthetically, Cover-Up is fantastic and definitely one of the better and more impressive looking films in Lundgren's DTV output. 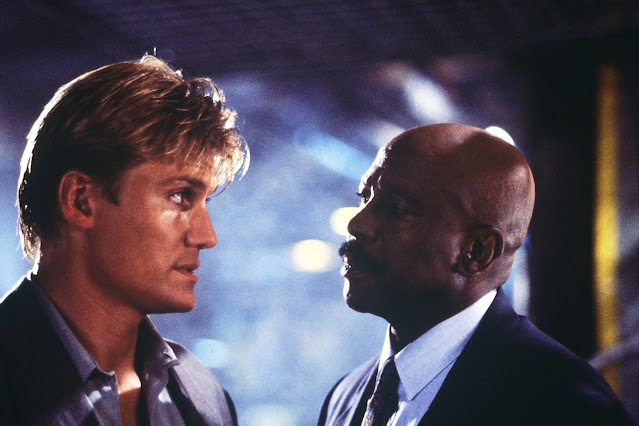 As far as stories go, it's good, unfolding as more of an Espionage Thriller rather than an Action Thriller, because as much as we had hoped, there's very little action. But the action there is, is done exceptionally well. I think what makes Cover-Up stand out from other films in Lundgren's career, especially where it sits in his filmography, sandwiched between action cult classics Dark Angel aka I Come in Peace and Showdown in Little Tokyo, Cover-Up is a stark contrast in that Dolph does no fighting, or kicking ass, or really using his brawn in general. Here he relies solely on his acting chops and he does an excellent job. If anything, I would consider this a pretty great example of his acting talents if you think all he has to offer are his muscles.

I don't really feel the need to mention how good Louis Gossett Jr. is because the man always delivers the goods 100%, and does not let us down here. He's just effortlessly great, and no matter the size of the budget or quality of the film, he frequently reminds of that he won an Oscar for his talents. He's just amazing, plain and simple.

I'm not saying Cover-Up will blow you away or that it's amazing, because it certainly has a few issues, like pacing and lack of thrills, but overall the film has so much else going for it that I can easily overlook those elements. It's a solid film, made exceptionally well, and if you're in the mood for a good looking 90's thriller set in the Middle East, it will certainly entertain.

Curious little side-note. This is the only film written by William Tannen, who directed some 80's classics such as the underrated Chuck Norris thriller Hero and the Terror, and the early 80's thriller Flashpoint.

Cover-Up is currently streaming in HD and widescreen for the first time ever on Amazon Prime.