Rad Comes to Theaters For 1 Night Only! 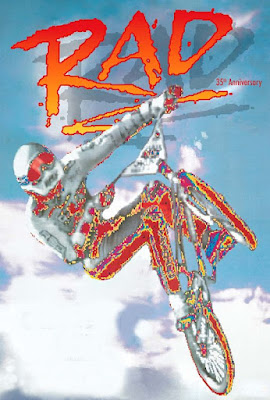 That's right! As part of it's 35th Anniversary, the iconic cult classic will screen for one night only on October 14th in an all-new restoration to celebrate it's anniversary, as well as a brand new documentary titled "A Rad Documentary: Inside the BMX Movie That Changed Everything". This is huge news! And may be the one and only time for some of us to ever get to experience this on the big screen. Snag your tickets now!

Here is the official announcement via Fathom Events:

As part of the Rad 35th Anniversary event, fans will see for the first time “A Rad Documentary – Inside the BMX Movie That Changed Everything.” Featuring never-before-seen interviews with the cast and crew and behind-the-scenes footage, the documentary gives audiences an inside look into the making of the film that helped catapult the extreme popularity of the 1980s BMX fad.

Man this movie has quite the history, and a complicated one at that. While it has become quite the certified cult classic, it has been an incredibly hard film to find for decades. It never got an official DVD release here in the states, leaving the VHS and Laserdisc releases insanely expensive and highly sought after by collectors. And I believe that's all tied to it's soundtrack and all the music rights associated with it if I'm not mistaken. We finally got an official HD release starting with Vinegar Syndrome's now Sold Out Limited Edition 4K/Blu Ray combo this past year, but has since been released a few other times in much cheaper editions on Blu Ray at a far more affordable price such as this Mill Creek edition that you can get on Amazon HERE for just $13. I should also mention that these new releases and restorations give us the first time ever seeing it in widescreen, as both the VHS and Laserdisc releases were only in full frame.

You can purchase your tickets via Fathom Events HERE. Who's going!?