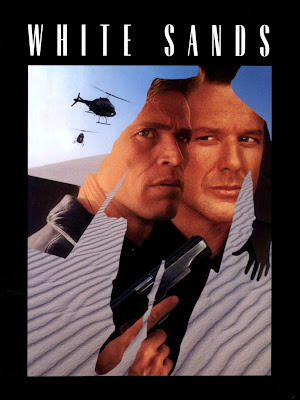 Just When You Think You've Seen All The Best Ones, A Surprise Pops Up Out of Nowhere

At this point, it's almost always a surprise when I discover an underrated gem within this genre, because I feel like I've almost seen them all. And that's exactly what this is; an underrated gem. A film I am shocked nobody ever brings up. The other day I was really feeling in the mood for a solid 90's thriller, one I hadn't already seen before. So I threw on Sandra Bullock's The Net, and I couldn't get past about 30-45 minutes because it was dull as shit. I'm sure with some different casting, and a different director, it would have turned out much better, but I found Bullock a bit unbelievable as the reclusive loner, yet stunningly gorgeous protagonist, and everything else was so stale on every level; supporting cast, direction, tone, and just generally keeping you entertained. That was all lacking. Then I stumbled upon this film. Funnily enough, I actually own this on Laserdisc, having picked it up years ago from a local record shop, but never got around to actually watching it. So when it popped up on Amazon Prime while browsing the other day, I didn't even think twice. Lets dig in.

When small town sheriff Ray Dolezal (Willem Dafoe) discovers a dead body in the desert, along with a suitcase with half a million dollars, he impersonates the man in order to get to the bottom of the case and discover how he died, only to get sucked into an FBI investigation that takes him deeper than he ever expected to go. 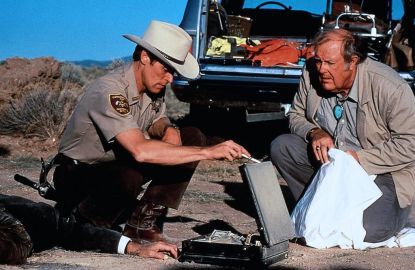 White Sands is the very definition of an underrated gem. The kind of film that is so good on every level, yet shocking that it never gets brought up, which is really such a crime. Gorgeous cinematography, knockout performances by a killer cast, with Mickey Rourke being the most effective, impeccable direction from director Roger Donaldson (Dante's Peak, No Way Out), and one superbly satisfying ending. This is the kind of thriller that more people need to be talking about. The many twists and turns the story took were nicely done, giving the film that hard-edged tone you really don't see much in detective films anymore. And while this would most certainly be categorized as more of a Neo-Noir, it has all the elements of a great detective-thriller as well.

Willem Dafoe never disappoints. He is the consummate professional, always delivering 100%, no matter what the role is, big or small. He gives it his all and delivers the goods every single time. That's why you never really hear anything like "Dafoe was so good in this, or that, or he really kicked ass", because he always does. That's the thing. He "always" does. Rourke was the biggest standout for me though. His star had already began to wane, and his previous film, Harley Davidson & The Marlboro Man was strictly a paycheck gig. So it was great seeing him deliver in a way that had become increasingly rare in his career at this point. The knockout supporting cast is filled with refreshingly familiar faces, most notably a young Samuel L. Jackson, before he exploded with Pulp Fiction. I wouldn't be surprised to learn he was picked for that film based on his performance here.

A smart, edgy, classy, razor-sharp thriller that really represents the best of what the 90's had to offer in this genre, and one I know I'll find myself revisiting from time to time because it's so damn good. Give it a shot if you're in the mood for a thriller. You won't be disappointed.