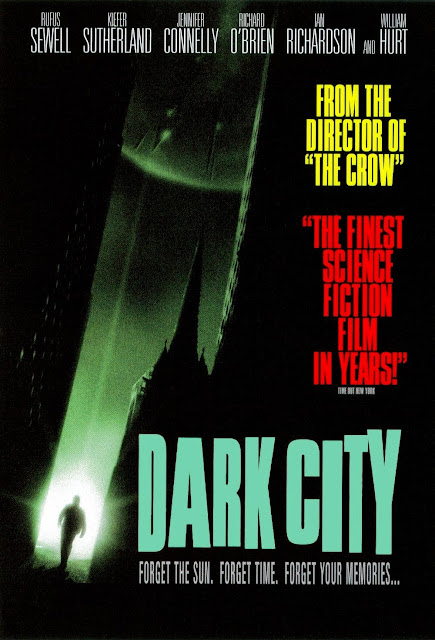 A True Masterpiece of Noir Filmmaking Like No Other

Not enough people talk about Dark City, and that really blows my mind. And I'm guilty of that too. But here's the funny thing. Once you do bring it up, people go nuts over it and can't stop talking about it. It's quite the little darling in the cult film world and again, I'm shocked more people don't ever bring it up.

I hadn't actually seen this in quite a few years. Mainly because I bought the Directors Cut Blu Ray years ago, and for some reason it wouldn't work on my Sony Blu Ray player. There was this constant cracking noise that ruined the experience, so I just put it away and forgot about it. I've since gotten a new player, an LG Region-Free player, and decided to see if it was the disc or the player, and yup, it was the player. It plays perfectly on my new LG. So I threw it on one evening and let me say, it was an experience that I live for. It blew me away all over again and reminded me just how special this noir masterpiece is.

One of my followers on Instagram left a comment that sums it up best when saying "Alex Proyas was a kid in a candy store with this flick". And it's true. You can clearly tell this was a passion project for him. One he's played out over and over in his head for years: certain elements, certain shots, certain designs, everything. And really, there is no one who could have pulled it off quite like Proyas did, especially after having come off the gothic classic The Crow. His very specific style of aesthetics, camerawork and tone lend themselves to a truly original and timeless experience with Dark City. It's unlike anything you've ever seen, and the fact that so much of it was made practically, having been shot in the 90's, only adds to the overall unique experience. This is Alex Proyas firing on all cylinders, which is amusing since I had attempted to watch I, Robot (2004), his big budget sci-fi film starring Will Smith, and I just couldn't finish it. He's definitely lost his very specific flavor when it comes to how he shoots, and attempting I, Robot only made realize that I miss how he used to direct films.

I think the issue that a lot of people had initially, and this is certainly the case when it was released theatrically, and even more so the case when trying to market it to the general public, is that it's really confusing and a hard film to describe. I know for a fact that they marketed it all wrong, which resulted in it being a box office dud. But watching the "Making Of" documentary located on the Special Features of the Directors Cut Blu Ray, Proyas states that this was on purpose. He wanted the audience to be as confused as the main protagonist, John Murdoch (Rufus Sewell). Finding clues throughout the film and trying to figure out just what the hell is going on. Why people can't remember past a certain date. Why it's always dark. Why things seem to change. That is a really ambitious approach, and sadly, one that didn't pay off initially. Though, as we all know now, Dark City is highly regarded in the cult film community as an absolute masterpiece of noir filmmaking.

Though I had remembered a lot of the plot points, I actually remember far less regarding the film as a whole than I initially thought. So in this case, it was almost like watching it for the first time all over again. And I fucking loved it. A pure visual feast, full of surprisingly great effects work, both practical and CGI, incredible production and costume design and a tone that dares to be different. If it's been a while, do yourself a favor and revisit this sci-fi/noir/drama/thriller/detective masterpiece.