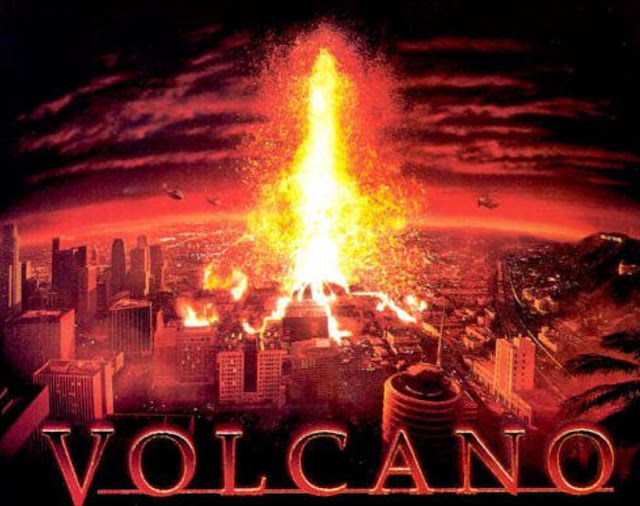 Volcano is a Blast. Literally

Much like the explosion of the Disaster Flicks in the 70's, the 90's saw somewhat of a resurgence with films like Dante's Peak, Deep Impact, Armageddon and Volcano to name a few. They don't seem to make them as often as they did, or as often as that little surge in the 90's, and they certainly don't make them like this anymore, utilizing a bevy of practical effects compared to CGI-heavy films like The Day After Tomorrow that would be the norm going into the 2000's.

Volcano is easily one of my favorite disaster flicks. It's one of those films that more closely resembles the type that exploded in the 70's; multiple storylines, large ensemble cast of famous faces, impressive practical effects, epic, and nonstop chaos. And honestly, I think that's where Volcano succeeds where others don't quite as much. This film is exhausting, but in the best possible way. It wastes no time in setting things up. Within 10 minutes the shit hits the fan and you're thrown into full-blown chaos and it never lets up for it's entire, and surprisingly short hour and 45 minute runtime. But so much is happening that it actually feels much longer. 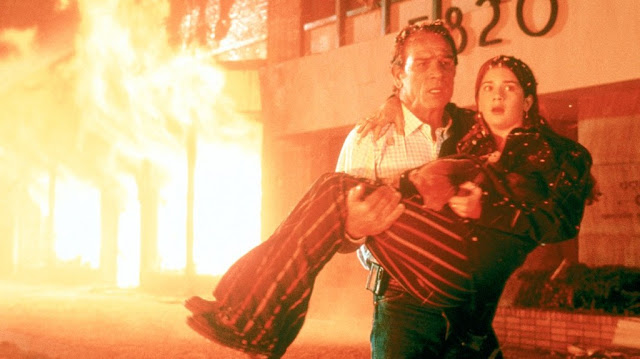 It's hard to imagine how they could have filmed a movie about a volcano erupting below the surface of Los Angeles in 1997, but they sure as hell did it and did it incredibly well. And while a lot of the amazing practical effects work should take the credit, I think director Mick Jackson (The Bodyguard, LA Story) really deserves a good chunk of the credit as well. As opposed to directors like Michael Bay, who released his own disaster flick the following year with the delightfully absurd and thoroughly entertaining Armageddon, Jackson directs everything with class. This is a classy flick and it makes it all the more entertaining, reminding you of the type of film that was all the craze a few decades earlier. Whether it was intentional or not, this film, above all others, is such a pleasant reminder, and a throwback if you will, to that very specific genre and it certainly doesn't get enough credit for that. Volcano looks, feels and plays out in such a classically epic way that it's hard for these types of films to top this one for me. It's a shame Mick Jackson doesn't get more credit as a great director. He had such a great little trifecta in the 90's with L.A. Story, The Bodyguard and Volcano, all films I love to death.

I'm not the biggest fan of Tommy Lee Jones personally, but he did a damn good job in this if I'm to be honest. It's a physically demanding role and while I don't much care for him, he certainly does a 180 compared to his horrendous performance as Harvey Dent/Two-Face in his previous film Batman Forever...but that's a whole other story. That goes for the entire ensemble cast here too. They all put in their A-Game and with nonstop chaos, action, thrills and excitement, it's an exhausting experience all around, and such a blast. 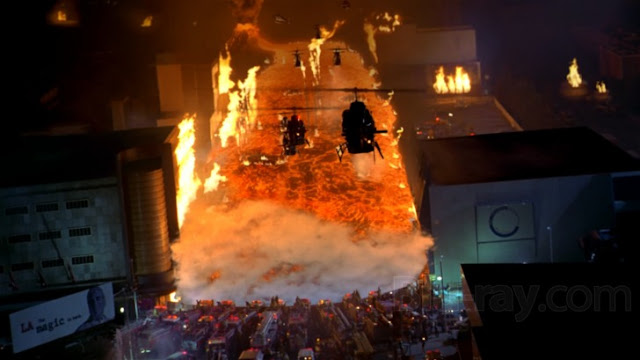 My one and only complaint comes from the ending. There is a sequence in the last 10 minutes that, despite a hugely impressive hour and a half of effects work that literally blew me away, looks cheap and feels tacky compared to the rest of the film. Not sure why it looks so bad, but it's a shame really when the entire rest of the film is impressive as hell.

If you're looking for classy old school epic entertainment, you really can't go wrong with Volcano. It's blast. Literally. Now I'll revisit Dante's Peak too. I've only ever seen it once, and didn't care for it at all at the time. Not sure why either. Volcano is currently streaming on Hulu Plus, but I'm definitely going to grab this on Blu Ray and add it to the collection.