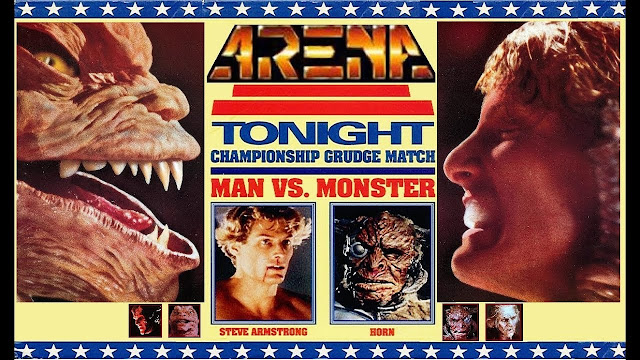 If you're like me, or if you're relatively close to my age (mid 40's), then you remember this film playing on either HBO or Cinemax way back in the early to mid 90's. And during the subsequent years, it would be a film that was relatively hard to get your hands on, as it never got an official DVD release here in the states, and to be honest, I think most people just either forgot about it or forgot what it was called. I know I surely did. It's one of those low-budget sci-fi classics that would play religiously on those channels, like Space Raiders (1983) and Android (1982), but would ultimately be forgotten.

Released in 1989, this Empire Studios release has so much to offer that it's still hard to grasp that it has yet to be given a proper release. Let's begin with it's impressive production. For starters, it's written by the creative duo of Danny Bilson and Paul De Meo (The 1990 Flash TV series, The Rocketeer, Trancers), and produced by none other than Full Moon's Charles Band. Former production manager and first assistant director Peter Manoogian (Eliminators) directs with gusto, giving the film a lot of the same energy and aesthetic that made his previous sci-fi film Eliminators (1986) such a cult classic. You remember that one right? That was another staple on cable television, with the main guy being half man, half robot, with his lower half being a mini tank. Yea that movie was awesome. 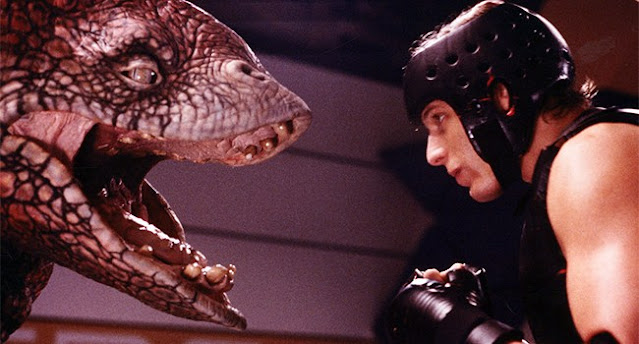 Newcomer Paul Satterfield plays Steve Armstrong, a cook at a local greasy dive who's dreams of becoming an Arena Fighter come to fruition when he's seen impressively pummeling an aggressive customer to the ground. The Arena is the biggest fighting competition in the galaxy, and the winner immediately becomes both rich and famous. But each bout, filled with aliens of varying species across the galaxy, comes with it's own challenges as Armstrong is merely a human in a world filled with aliens. As corruption within the tournaments rears its ugly head, Armstrong and his team, led by the beautiful Claudia Christian (The Hidden, Maniac Cop 2) fight to win the tournament fairly.

Arena is so much fun. Not only is it a great looking film, full of impressive production design, makeup effects (even for it's budget) and a solid cast of notable character actors who you're sure to recognize (even under a lot of prosthetics and makeup), but it's tone (in all it's PG-13 rated glory) reel you in from the beginning and it's a helluva fun ride. In a lot of ways, it has a lot of the same charm that made Stuart Gordon's Robot Jox (1989) from the same year so damn good. 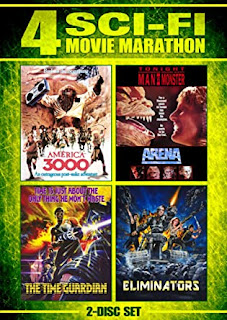 One thing I want to mention is that the lead here, Paul Satterfield, who would go onto appear in several soap operas, reminds me so much of Christopher Reeve. Tall, athletic and handsome, I'm shocked his career didn't take off as a lead.

Now I mentioned earlier that it has never gotten an official DVD release here in the states, and that's not entirely true. It was released as part of a 4-Pk from Shout! Factory back in 2003 on DVD, along with Eliminators, America 3000 and The Time Guardian. Sadly, they're all in full frame, except for The Time Guardian, which is the only one in widescreen. This set is super cheap, but then again all you get are 4 films with no extras and not even in their proper aspect ratio. So technically it has been released on DVD, but never as a standalone film. I feel it could surely be due for a spiffy Blu Ray upgrade by now.

Last I checked, Arena was currently streaming for FREE on The Roku Channel, but I'm not sure for how long

EDITORS NOTE:
Please consider a donation so that I may continue doing this for you. In these tough times, every little bit helps, and further allows me to continue to spend the time needed to write these articles for you. I know it's a bit unorthodox, but we are in strange times and I have not been resistant to the turmoil that COVID has caused financially. Even if it's just $1, $5 or whatever. It would be greatly appreciated and I thank you. You can make a donation to my Venmo: @robotgeek
Posted by robotGEEK at 9:40 AM