Seriously? What The Fuck Happened???

When I saw this pop up on TubiTV recently, it occurred to me that it had been well over a decade since I last saw this. And like most of you, I just did not like this when it first hit theaters. I should mention that when this was released, I was thick in the middle of my Spawn obsession. Oh yea, I was a die-hard Spawn geek when he first hit comic book stands in 1992. I was about 16, and when the toyline hit 2 years later in 1994, I was full blown obsessed with this character, hitting every Walmart, K-Mart, Toys R Us and Target store located within 50 miles of our little town trying to snag every single figure from this line. I was so obsessed that when I turned 18, I got a Spawn tattoo.

Yes, you read that right. I got a fucking Spawn tattoo when I was 18 years old. So you can imagine my excitement when learning that a live-action film was in the works via none other than New Line Cinema, the same company responsible for the insanely awesome live-action Teenage Mutant Ninja Turtles (1990) film (which I was equally obsessed with) and the Nightmare on Elm Street franchise. I felt the film was in the right hands because the comic, storyline and even the toys were quite dark, and if anyone could handle the material, I felt that New Line could, especially given how amazing the first two TMNT films turned out. 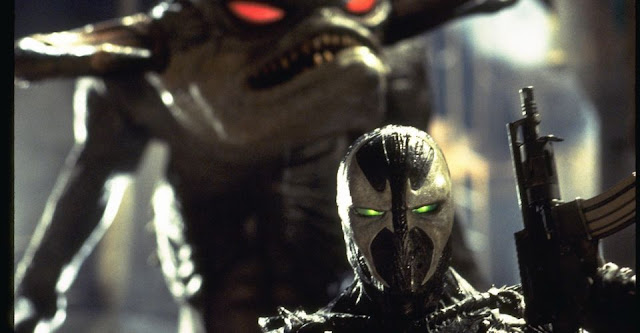 Then I saw the film. I remember opening night vividly, sitting there with my buddy excitedly as a guy went up front to present and discuss the film before it started playing. Well, it sucked. I walked away shockingly disappointed and confused as to how they could take so many liberties with the source material and completely ruin the basic principles that McFarlane had laid out for the character.

First and foremost, let's talk about the cape, or better yet, the lack thereof. What the fuck? How can you take one of the most important and iconic aspects of his "look" away almost completely, and then when you DO allow it to be present, it's a CGI cape? And a bad one at that. The cape CGI is fucking terrible. I get the concept about it being an extension of his will, using it as a weapon or as a shield. But I think that could have been an aspect of the mythology they could easily have done away with so it didn't look so goddamn awful on film. I guess it's good that cape rarely ever makes an appearance anyway.

Then there's the fact that they pull a Judge Dredd (1995) on us and have Spawn without his iconic mask for the majority of the film. So first you take away his cape, and now he doesn't even wear his mask most of the time, instead leaving his burnt head exposed. Whhhyyyyy????

Michael Jai White is actually pretty good and effective as Al Simmons/Spawn, but the casting of Martin Sheen as the villain is really odd. Not only does he look strange with his badly dyed jet black beard and hair, but he just doesn't come across as villain material, especially since he's so small. But I'm sure they were needing a big name to help sell the film to a broader audience.

And lastly, the climax of the film takes place in a living room. That's right. After all that buildup leading to Spawn exacting his revenge on Jason Wynn (Martin Sheen), the finale of the film, or it's third act, takes place in a.....wait for it.....living room. I mean, what a real letdown to have so much of the film building up to this point, only to have it fall apart in the end. Sure they jump in the fireplace and take a quick detour to hell for a few minutes, but if you think the CGI cape was bad, holy shit. Hell looks 100 times worse. I really wish they hadn't even bothered trying to depict Hell or even Malebolgia, because they're both just so laughably bad. For a film that began with $20 million, and was kicked up another 20 to a total of $40 million, the effects work still looks terrible. 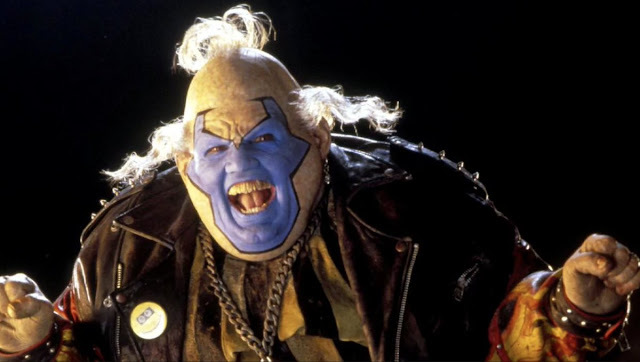 Now on to the good. You know, as a film, Spawn doesn't actually look bad. There are times when it has a nice professional quality to it that reminds you that you're watching a big budget adaptation of a dark and violent comic book film. I'm talking strictly cinematography and visual aesthetic here. And then there are moments when it looks like a Made-for-TV movie. It's such an uneven mess all around, including it's visual aesthetic, that it makes it really hard to find some bright spots in this. But there are a few.

The makeup by KNB is pretty fantastic. Clown is spot-on and really both frightening and utterly annoying (be sure to watch it with subtitles to understand what the hell he's even saying), while Spawn's suit and burnt makeup effects are pretty gnarly....sans the missing cape and mask.

The effects work isn't all bad though. Violator looks fucking cool and much like Clown, is spot-on and taken right out of the comics. I know ultimately they had to delegate different effects companies to handle all of the CGI effects in this, so I'm not sure which one was responsible for the Violator effects, but they're arguably the best CGI effects in the entire film. 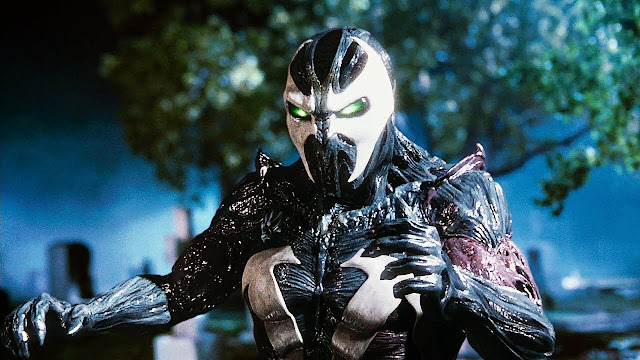 And finally, all of the little nods to a few other characters from the comics were impressive and a much needed highlight overall. Angela, Sam & Twitch, the news reporter and a few others all make nice little subtle cameos.

All of these surprisingly good aspects still don't do enough to save this mess. I can see it being a guilty pleasure for some, but for me, someone who actually really enjoys unintentionally bad films, even this one is a huge misfire for me. It was a very stupid decision to remove his cape from his look, and while the practical action sequences were entertaining enough, it's when the film dives into it's core mythology that this live action adaptation falls apart. It's no surprise that former visual effects supervisor and first-time director Mark A.Z. Dippe never directed another theatrical feature after this. 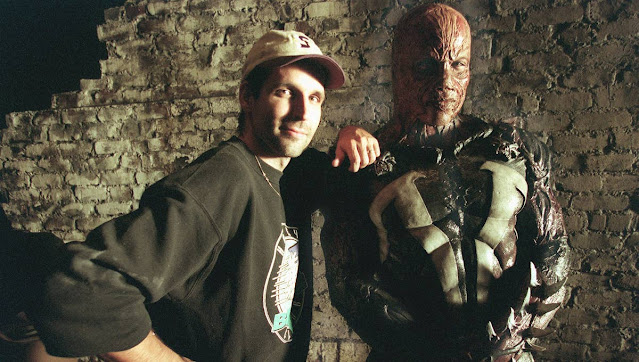 Needless to say, as soon as my initial film experience was over, I was already making plans to get my Spawn tattoo covered up. It was something that was already in the works as I had grown tired of the Spawn comics in general. They definitely became too weird and complicated for my taste when it started branching out into different alternate realities and alternate universes, thus ending my love for all things Spawn; the character, comics, toys and various other merchandise associated with him.

EDITORS NOTE:
Please consider a donation so that I may continue doing this for you. In these tough times, every little bit helps, and further allows me to continue to spend the time needed to write these articles for you. I know it's a bit unorthodox, but we are in strange times and I have not been resistant to the turmoil that COVID has caused financially. Even if it's just $1, $5 or whatever. It would be greatly appreciated and I thank you. You can make a donation to my Venmo: @robotgeek
Posted by robotGEEK at 5:44 PM