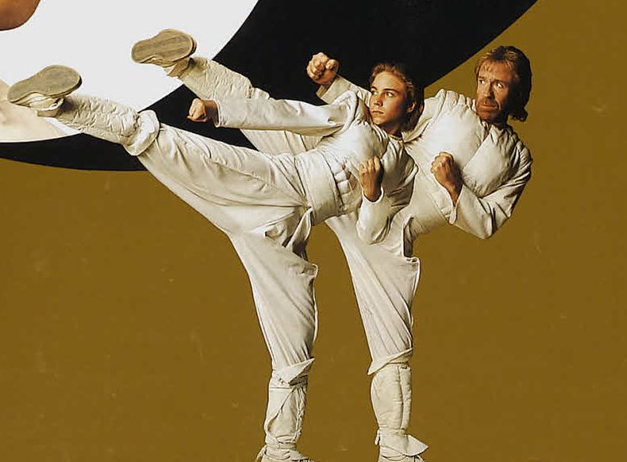 Somehow I never got around to this film before. Surely I remember it, but I also remember not being all that interested in it at the time. And I'm sure had I seen it, I might have still felt the same way. But then again, maybe I would have loved it? I don't know. But watching it now for the first time, nearly 30 years after it's original release, I am just floored by how good this was and how much I enjoyed it. Let's dig in.

Released in 1992, Sidekicks tells the story of Barry (Jonathan Brandis), a weak and mild-mannered teenager who fantasizes about being Chuck Norris' sidekick, often daydreaming about being in the very films that we all love from Norris, such as Missing in Action, Delta Force 2 and The Hitman to name a few. When a kind teacher takes a liking to him, she sets him up with her uncle (Mako), a martial artist who decides to take Barry under his wing to train for an upcoming karate championship. 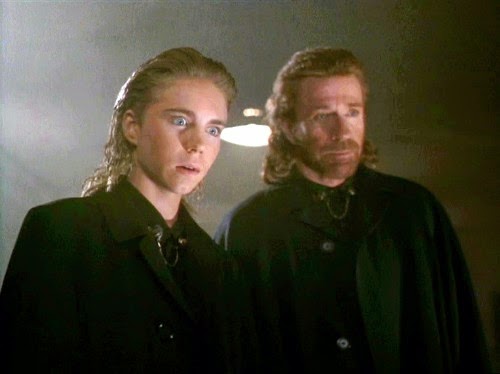 The film carries such a pleasant charm that it's really hard not to love it. Completely engaging right from the very beginning, and full of heart in a way I was not expecting, Sidekicks also benefits from some seriously hilarious moments courtesy of the legendary Joe Piscopo, who plays an over the top sensai of a local karate dojo, and a sworn enemy of Chuck Norris. As great as Sidekicks is all around, I doubt it would be half as good if not for Piscopo's casting here. Literally every single scene he's in is pure gold, and I laughed so fucking hard. Not only is he the villain in the overall story arc, but he's also the villain in all of the movie sequences Barry transports himself into and it's pure genius. I mean, what other universe could Piscopo play the villain in a Chuck Norris film?? Mr. Piscopo, I salute you.

In the directors chair is Norris' brother and long time collaborator Aaron Norris, and he does an outstanding job here. While I was never much of a fan of his style of directing growing up, I've certainly grown to love and appreciate it in my older age. Where I originally saw his style as plain and boring, I now see as slick and refined in a way that a lot of directors were never able to capture consistently. If anything, Norris was a consistent director in the best possible way. His films might not have always been great, but most of them were, and they all looked good. This was wedged between The Hitman and Hellbound, both also directed by Norris, and while I thoroughly enjoy The Hitman (even though I feel it should be better), I really could not get into Hellbound. But I should revisit it soon. I might feel differently next time around. In fact, I think I'll revisit both of them. 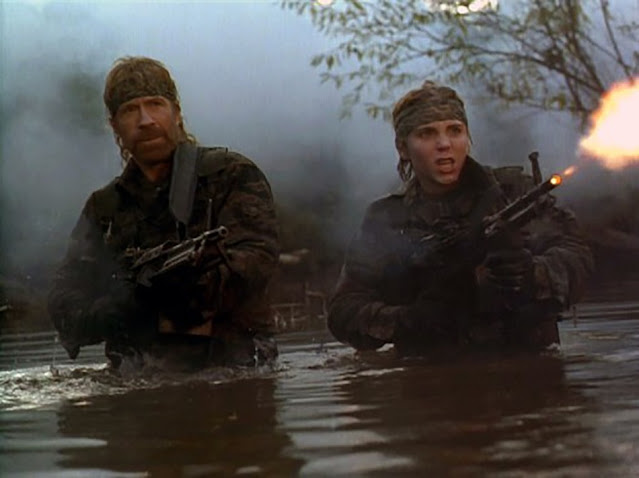 Another one of this films many pluses is it's surprisingly stellar cast. Of course there's good ol' Chuck, and the late-great Jonathan Brandis (It, Seaquest 2032) turns in a really great performance as Barry, but there's also Mako (Conan The Destroyer), Beau Bridges (The Wizard) as Barry's dad, Julia Nickson (Rambo: First Blood Part II), Danica McKellar (The Wonder Years), Richard Moll (Night Court) and of course the one and only Joe Piscopo (Dead Heat).

In the grande scheme of things, it is ideal that you have seen the films they keep referencing in Barry's daydreams, because it's what makes these sequences work so well. Sidekicks is a film full of heart, laughs and just good vibes all around. Aaron Norris' direction is slick and solid, the score is inspirational, and it all comes together seemingly effortlessly in the best, most cheesy 90's way possible. In short, Sidekicks rules and rules hard. 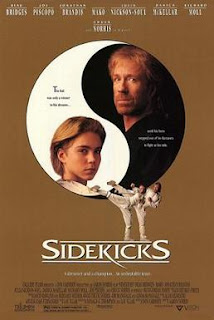 Unfortunately, this has never made the leap to DVD or Blu Ray here in the states yet. And like many Chuck Norris/Aaron Norris collaborations, this one has never gotten the widescreen treatment either. At least here in the U.S., it's only been released on VHS and Laserdisc, and it's not streaming anywhere on any platform that I could find. I had purchases a DVD from Australia claiming to be an official remastered DVD, only to discover it's a bootleg from a Laserdisc source. So whichever way you go, just be aware that you're not going to find it on DVD or Blu Ray officially. At least not yet.

Talking to people about my experience watching this film for the first time, I was delighted to discover that it's a cult classic in the truest sense. People REALLY love this movie and it's one of those that they grew up on and have loved ever since. I feel if any of Chuck's older films could benefit from a new updated release, it's this one.

EDITORS NOTE:
Please consider a donation so that I may continue doing this for you. In these tough times, every little bit helps, and further allows me to continue to spend the time needed to write these articles for you. I know it's a bit unorthodox, but we are in strange times and I have not been resistant to the turmoil that COVID has caused financially. Even if it's just $1, $5 or whatever. It would be greatly appreciated and I thank you. You can make a donation to my Venmo: @robotgeek
Posted by robotGEEK at 10:39 AM