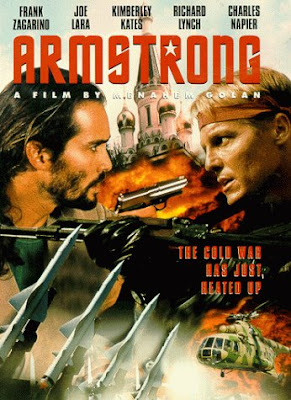 Oh how the mighty have fallen. Or have they? I suppose there's a valid argument as to whether Menahem Golan was ever a good filmmaker to begin with. I mean, we all love the classics he produced under his Cannon Films banner in the 80's, but as a director, his 2 crowning achievements are indelibly The Delta Force and Over the Top. And it can also be argued that he's not entirely responsible for the successes of those films. I mean, you could also attribute the cinematographers and editors to how good those films turned out. And don't get me wrong, I love the guy! Hell, I have a Cannon logo tattooed on my forearm! That company and those films were such an integral part of my upbringing.

Written and directed by Cannon legend Menaham Golan under the Nu Image banner, Armstrong is a disaster of epic proportions that needs to be seen to be believed. How this film has never been mentioned to me before is a travesty, because it's quite literally one of the BEST Bad Movies I've seen in a very long while. I watch a lot of low-budget action movies, and to be honest, most of them are not worth mentioning. So when I come across a true hidden gem like this, well I personally feel it my duty to let the world in on this little secret.

Armstrong is insanely enjoyable because it's so laughably bad in literally every single aspect. It's completely absurd every single minute, and just when you think it can't surprise you or make you laugh out loud anymore, it takes it a step further.

This is a prime example of the "one-take" wonder, where no matter that the shot is good or usable or not, whatever that first take got is going into the final product. You'll see extras staring right at the camera, supposedly dead people flinching at the sound of a gun, hilarious dialogue, obviously glued on red stars half falling off to represent Russian tanks, punches being thrown, but the person on the receiving end not even reacting, and the list goes on and on. You'd never know based on this that Golan had ever directed a film prior to this because this is incredibly cheap, fast and amateurish. But holy hell is it a blast!!

It's hilarious for all the wrong reasons and shockingly inept. The acting, even by veterans such as Charles Napier and Richard Lynch is surprisingly awful. And let me tell you, there is this hella strange 20 minute long chase sequence involving a gorgeous half-naked woman that will blow your mind. This is pure gold I tell you and if you enjoy terrible, yet fun films, this one is right up your alley.


You can currently stream Armstrong on Amazon Prime and TubiTV right now.
Posted by robotGEEK at 7:28 PM