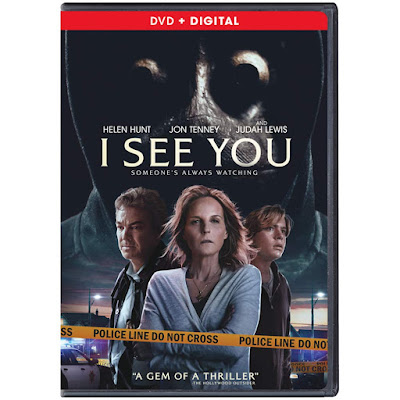 Now here's an under the radar gem if there ever was one. I See You is a film I came upon solely through word of mouth. And whats interesting is that while it was a film casually mentioned to me a few times by different people, it wasn't a film that was "strongly" recommended, which honestly shocks me because ultimately, it was one of the best, most well written thrillers we've seen in a long time.

I See You is such a paradox, and a fucking brilliant one at that. On the surface it looks like any number of low-budget Direct-to-Video (DTV) thrillers you see on any streaming platform. And I'm going to be honest, that poster art doesn't help. In fact, that poster art makes it look more like an episode of some by-the-numbers cop drama on TV. But let me tell you, you're in for a real treat, because not only is it not anything like that, but the ride you'll take will lead you in directions you never saw coming.

I'm a bit torn to really tell you any more than that for fear of giving too much away. We went in fairly cold, having not even bothered looking at a trailer. So do yourself a favor and DO NOT watch the trailer. What I will tell you is that the tone, and hell even it's genre, shifts several times, which kind of blew my mind. The casting across the board is really solid, with Helen Hunt really turning in a killer performance. The cinematography is really impressive, with director Adam Randall delivering some truly stunning visuals, especially for a film this small. And the script, by first-time writer Devon Graye will blow you away. For a guy who hasn't written a film before, you'd be hard pressed to find one this tight, taut and filled with ingenious plot twists. One interesting thing to note is that he's also an actor with a wide range of roles in both film and television, but who I will always remember as being the teenage version of Dexter Morgan on Dexter. If this film is any indication, Graye has a great career ahead of him as a screenwriter and I for one can't wait to see what he comes up with next.

I think one of the best thing this little gem has going for it are the constant surprises. With so many "Whaaaaaaat???" moments, I was never able to figure any of them out beforehand. I just remember both of us kept looking at each other quite often and blurting out "whaaaaat?", or "nooooo way, are you kidding me?!".


I See You is currently streaming on Amazon Prime right now. Do yourself a favor and check this out ASAP
Posted by robotGEEK at 1:10 PM