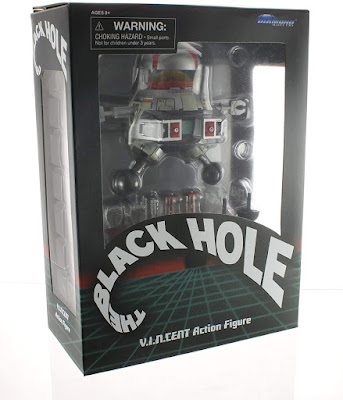 When we recently signed up for Disney+, one of the first things I did was introduce my wife to the glorious 70's gem The Black Hole. Being that the limited edition Blu Ray sells for a lot higher than I'm comfortable spending on the secondhand market right now, this is the next best option. Whats more, it's in HD, which is really the only way to see it.

Of course she went in skeptical, but of course she ended up loving because like I told her before we started, this is not a kids film. A dark, brooding and outstanding visual spectacle that kickstarted a very brief period in Walt Disney's history where they attempted to make darker, more mature films. This was a time when their animated films weren't making the money they used to, and it's hard to imagine today, but Walt Disney was struggling. What resulted were some classics that while were not technical hits upon their releases, are considered genuine cult classics today such as The Black Hole, Tron and Flight of the Navigator. 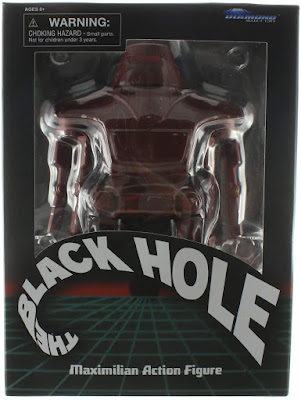 After this latest revisit, I decided to jump on eBay to see if there were any Black Hole collectibles I could find, and while there are a number of products that were released during the film's run in 1979, most of them highly sought after, what really shocked me was that apparently some new Black Hole figures were released fairly recently, and I had no idea. How did this slip through the cracks for me? I can't tell you, but here's the rundown. They are released through Diamond Select, and are Walgreens exclusives, meaning you won't find them in any other store other than Walgreens. Of course there's online, which would generally mean that they were purchased from Walgreens and are being resold. Whatever the case, they're out there and they're beautiful.

There are two figures, V.I.N.Cent and Maximilian. They come in a nice sturdy box with a big display window and run $19.99 each if you can find them in a store. I searched every Walgreens in my area and did not find a single one. Though they still had plenty of Tron figures. But ultimately I had to resort to eBay for the best deal and factoring in shipping, I pretty much paid what I would have paid had I found them in the store myself for a set. And they're worth every penny, because both the figure and the packaging is just beautiful.

Flippers have made this Diamond Select release a really hard one to find in person, so your best bet is to just probably go through them to get your hands on them, which is ironically sad, but worth the effort.
Posted by robotGEEK at 1:40 PM