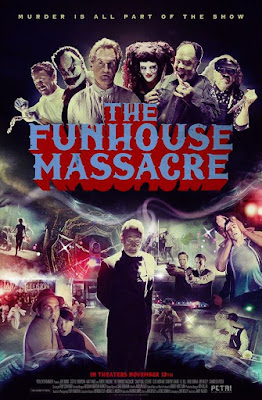 It's always a treat to discover little gems like this. I hadn't heard anything about it beforehand, never even knew it existed until I came across it while browsing a Redbox machine. But still, I passed on it because I didn't know enough about it to warrant taking a chance. Then the other day an instagram friend posted how she really enjoyed it, so that piqued my interest. I proceeded to ask a few questions and when she used the term "cheesy gory fun", I was sold. I hit my local Redbox that very night and hoped for the best.

A group of mental patients/killers escape and take over a funhouse/haunted house on Halloween.

The Funhouse Massacre hit all the right notes for me. It's cheesy, it's gory, it's fun, it's funny, and it's surprisingly well made and competent. It's not serious, or even scary for that matter, but it's not trying to be. It's simple story/premise let's you know right away, and while there have been countless horror movies centered around a haunted house/funhouse theme, I can't remember one that was as entertaining as this one.

One of the highlights for this, for me anyway, was the better than you expect ensemble cast. It's a large cast, with each of them being a good enough actor to not come off as annoying, something that seems to be the norm these days with young actors in horror films. On top of that, they pepper the film with a healthy dose of horror cult icons like Robert Englund, Clint Howard and Courtney Gains to name a few. But really, the entire cast is pretty solid, where it really could have gone the other way and easily ruined the experience.

I've read a number of online reviews where people were just flat-out hating on this, and for the life of me, I can't understand why. It's a fun horror film, simple as that. It's not trying to prove anything and it's not trying to reinvent the wheel. It's a slasher that takes place in a funhouse with fun over the top gore and shot competently for the most part. Really, what more could you ask for in a low-budget horror film?
Posted by robotGEEK at 3:08 PM