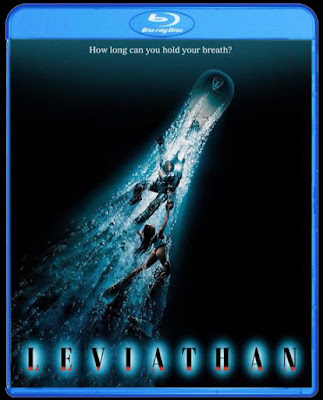 George P. Cosmatos' underwater sci-fi/action/thriller finally got the blu ray treatment back in 2014 courtesy of Shout! Factory. As you know, while they do a great job finding hidden gems and cult classics that never saw a release beyond VHS or Laserdisc, they also release a lot of mainstream stuff, which is great too of course. But if you follow these releases, and the reviews that soon follow, then you are aware that the quality of some of their releases, even the higher profile ones like Escape From New York for example, vary greatly from one release to the next. But one thing you can always count on are great Special Features in nearly every release.

It took me a few years, but I finally caved and bought this release, even though I'd been wanting it since it's release. I don't know why I just didn't buy it immediately. So here we are and here are my thoughts on the blu ray release of this cult classic.

The transfer to blu ray is flawless. I didn't notice a single grain or speck anywhere in the film. The blacks are a dark solid black, and the film in general, which carries a light blue tint throughout, is stunning to put it frankly. Every frame pops with vibrancy, and it's as clear and gorgeous as it's ever looked. Simply, it's never looked better.

One of the highlights of this release, besides the stunning transfer, is the excellent doc found on the Special Features revolving around the makeup and special effects for the film. Legendary effects artists Alec Gillis and Tom Woodruff Jr, under the supervision of Stan Winston at the time, go in depth, along with other's, on the making of the film, working with passionate director George P. Cosmatos, the idea's behind the final monster makeup, as well as the film's initial luke-warm reception and cult status. It also goes deep into their working relationship with Stan Winston, and Winston's tumultuous relationship working with Cosmatos. It's really a great doc and well worth the purchase of this release alone.

I've always loved this film. Sure it's essentially just a mixing pot of The Thing, Alien and a slew of other bigger better films before, but it's just so much damn fun. There's no denying that. Whenever I introduce this to people, I just tell them it's basically a big budget B-Movie. It's got an incredibly talented ensemble cast, led by Peter Weller, and shows once again George P. Cosmatos' (Cobra, Tombstone, Rambo: First Blood Part 2) ability to be an even-handed director with just the right amount of flash. For a film that takes place primarily in an underwater station, Cosmatos gives it a slick and stylish aesthetic. The nice build-up of tension, the killer cast, the great practical effects work, and the films visual eye candy make this a treat.

Anyway, I hope this helps anyone out there who's on the fence about buying this. When it comes to blu ray's, I always do my fair share of research before a purchase because most studio's tend to just repackage and re-release previous titles, or new companies don't take the time to actually "fix" the print when converting it to HD. I'm happy to report that in the case of Leviathan, it's simply stunning and one of my best blu ray purchases.
Posted by robotGEEK at 10:41 AM