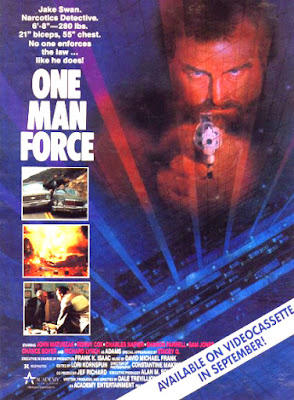 Much like myself, I'm sure you came across this VHS back in '89 at your local video store, maybe even when it was moved to the "Action" section later on during it's shelf life. I know I did. Like me, you probably passed on it numerous times, for no real reason in particular. Recently though, as I feed my "low-budget action" addiction, I was somehow reminded of this title, and when I did some digging, I found out that outside of VHS and Laserdisc, a very low-grade poor quality DVD release in full frame was all that was available. Thankfully for me, a brilliant and generous person uploaded the entire film to YouTube.

I can't believe I hadn't seen this film until now. I was vaguely aware that John Matuszak was a former football star, but I don't think I was aware though at the time that he was also Sloth in The Goonies. But I've always been a fan of action, even more precisely, low-budget action, so the fact that I never gave this a shot until now still baffles me.

One Man Force is awesome. Let me just make that clear first. OMF is just the kind of low-budget balls-to-the-wall action flick I live for. I hoped it would be good, but I didn't expect it to be this good. In terms of entertainment value, OMF delivers the goods tenfold. Why? Because intentional or not, this renegade cop flick is so over-the-top, and so cliche, that you'd swear it was a parody, only it's not. It's all played straight and for that, this film kicks ass.

In terms of plot, just think of the most typical and contrived plot you can think of in an action film, and it's probably this. Cop with a bad attitude goes out for revenge after his partner is killed in the line of duty. Constantly butting heads with his captain, he goes rogue, trying to find the people responsible, only his investigation leads to dangerous territory. Same old story you've seen countless times. Except, in this case, it's so......"in your face" that it's almost comical.

There is nothing more satisfying for me than to come across an unexpected action gem like this and to be totally surprised. If there's one thing OMF has going for it, it's that it delivers on the "rogue cop" stereotype and runs with it head on. It's like writer/director Dale Trevillion watched every 80's cop film he could find, copied every single cliche, every single archetype of this very specific genre, and dialed it up to 11:
Angry cop with a bad attitude: Check.
Cop butts heads with his boss: Check.
Cops partner gets killed so he goes out for revenge: Check.
Cop uncovers a larger more sinister conspiracy at play: Check.
Cop is virtually indestructible: Check.
It's all here and it's fucking fantastic. 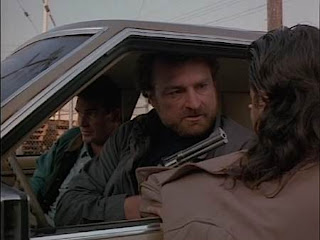 John Mutaszak is such a badass in this. How badass is he? The dude physically lifts regrigerators and coke machines and throws them agains bad guys. That's how badass. His performance in this is so "on point" that it's almost a caricature of the one-man-army rogue cop. It's hilarious! He alone makes this film as great as it is and had he lived, he could easily have been one of THE premier action heroes. I was so sad to learn that here he finally was given his own starring role, after having numerous supporting roles and bit parts, in his very own action film, only to pass away unexpectedly that very same year at the young age of 38. The guy never even had a chance to enjoy any real kind of mainstream success. I don't know if that was necessarily in the cards or not after this film, but just from this film alone it's painfully
apparent that this guy had a presence. A huge presence. He was a natural, more so than most guys who do end up having some form of success in this field. For someone who was only 38 years old, he comes off much more mature than that. And with a 6'8 height and muscular frame, the guy is a hulk, and fiercely intimidating. When he's angry, it's scary. When he's gentle, he's like a big teddy bear. I'll bet the guy could easily have gone on to bigger and better films later on down the road, even outside of the action genre. If this film is any indication, the guy had enormous potential. It's a shame his demons had a tight hold on him, as his death was attributed to an accidental overdose. He was always candid about his battle with addiction throughout his life. I guess he just couldn't beat it after all.

Despite it being cheesy as hell and so entertainingly over the top, OMF also sports a killer and better than I expected supporting cast of notables like Sam Jones (Flash Gordon), Charles Napier (Rambo II), Richard Lynch (Invasion USA), Ronny Cox (Robocop, Total Recall), and a few others whose faces look awfully familiar. It's always fun to watch something like this, and to see all these familiar faces. It makes the experience all the more enjoyable and comfortable.

I honestly can't praise this film enough, if you're into this particular genre. It's got it all, and continuously pushes the envelope throughout. It's no Oscar winner, but in the realm of Badass Cinema, this is damn near close to a work of art.
Posted by robotGEEK at 3:11 PM