The Invitation Film Review: Get Ready to Scream at Your TV 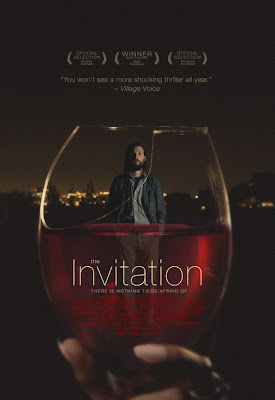 I went into this one knowing absolutely nothing about it, other than my wife telling me that it was getting some praise in one of her Facebook horror groups. So that's really all I knew, and the fact that it was on Netflix made it an easy choice for a Sunday afternoon.

A man is invited to a dinner party by his ex-wife and group of friends, who he has not seen in 2 years. Hesitantly he accepts, accompanied by his girlfriend, only to discover that all is not what it seems.


WARNING: Minor Spoilers Ahead:
I should start off by saying that for the most part, The Invitation, on a technical level, is made really well. I found the camera work and shot compositions to be done competently and artistically. The acting from the large ensemble cast was also really well done. While the majority of the cast was made up of faces and names I'd never seen before, there were a few in there that you will recognize. And that's pretty much all the positive praise I can give it because ultimately, I found this to be a dull, tedious, boring, and frustrating experience.

For starters, the film is just too damn slow for it's own good. Literally nothing happens for such a huge chunk of the running time that I found myself constantly checking the clock to kind of gauge how much time was left in the film. And while the film was shot nicely, it was also incomprehensibly dark and poorly lit for the most part. Why is everything so dark? Why are there never any lights on? In virtually every single shot, there might be a lamp on in the corner, and that's it. It may have been to give off a specific mood, but it also made it painfully hard to tell what was going on most of the time.

But that's really chump change compared to how infuriating you'll be watching things play out. If you are someone who values logic and common sense, then this could be one of the most painfully annoying experiences you'll ever have watching a movie. You'll constantly be screaming at the television because the choices made by so many people defy any real sense of logic. It's maddening!

"How or why did they let it get this far?!"
"Why doesn't anybody else sense the danger?!"
And most importantly, "Why didn't he just fucking leave?!"

When things finally become revealed in the last act, the pace is picked up considerably. While that was a nice change structurally, a lot of what happens in that final act only beg more questions with no answers, leaving you even more confused, frustrated and annoyed. I might be in the minority with this one though. Looking online and in some other groups, I can see that it get's a healthy dose of praise, especially in the festival circuit where, apparently, it created a lot of buzz. But honestly, it's a tiring experience, and while the performances were good, the film thinks that it's too smart, and the viewer is dumb enough to eat anything they dish at us.
Posted by robotGEEK at 11:15 AM