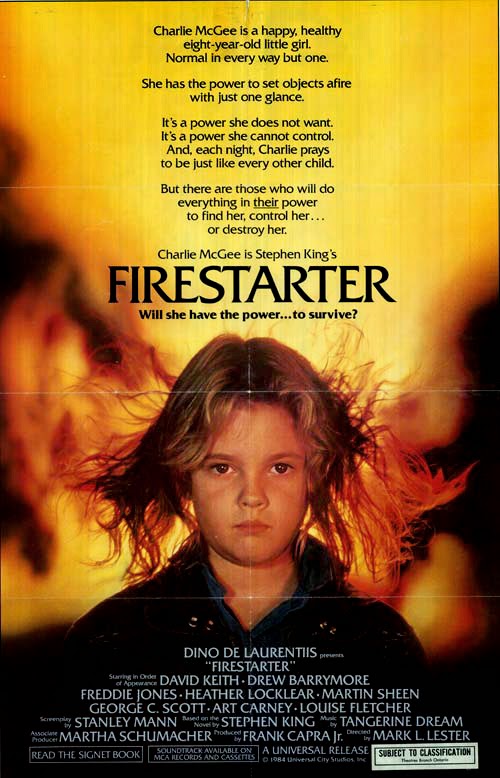 As I scratch my early 80's horror itch, I realized that I never got around to ever watching this one. Strange, since I'm a big fan of the director, Mark L. Lester, who gave us such gems like Commando, Class of 1984, Class of 1999 and Showdown in Little Tokyo. So yea, I'm a fan.

Released in 1984, Firestarter came out in a time when practically every single Stephen King novel was being made into a movie. Carrie, Christine, The Shining, Cujo, The Dead Zone, Creepshow, Cat's Eye, Children of the Corn, Pet Semetary and so on. It's different now, but when a Stephen King novel got the movie adaptation, it was a pretty big deal. It was almost a guarantee that a SK movie would be a bonafide hit, and believe it or not, practically every single one was. Once the 90's came around though, that all started to change. Sure, we did get a few gems like Misery, Sleepwalkers - though I'll admit that one is not for everyone - and some really good drama's like The Shawshank Redemption and The Green Mile. But the 90's was the beginning of the decline of King's rule at the box office in the horror genre as a lot of his novels turned into films were becoming of less quality than we'd become accustomed to. I think the nail in the coffin was when most of his stuff just started going straight to video and made for television. Nowaday's it's extremely rare when a King film is a hit, let alone comes out in the theaters.

One of the things that surprised me right off the bat with this one is the stellar cast. Martin Sheen, David Keith, Drew Barrymore, Louise Fletcher, Art Carney, and a wonderfully evil turn from George C. Scott. Everyone is just fantastic in this; all delivering knockout performances. But it's really Barrymore's show here. This was her first film after the massively successful E.T. and I have to say, casting kids in lead roles is extremely tricky. Pick an annoying kid and it can certainly ruin the film experience for you. A good example is that kid in Tobe Hooper's Invaders from Mars remake. While I still loved the film, that kid was just flat-out terrible and I've heard several times how his performance pretty much ruined the experience for a lot of others. It almost did for me. But Barrymore is a solid actress, no doubt. You saw what she had to offer in E.T. 2 years earlier, but here her range is on full display and quite honestly, she's one of the best child actors I've ever seen.

I really liked this film. It starts off strong, and ends with a bang. Director Mark L. Lester's restrained camerawork feeds into the films overall early 80's aesthetic, keeping things simple, yet effective. It works remarkably well. Take into consideration that this is an early 80's production, and you have that immediate "old school" look. It's awesome. I sincerely doubt that if this would be remade today, it would never, or could ever, have the same visual impact and ambiance that this film presents. There's just no way. Then when we get to the third act, and all hell breaks loose, Firestarter becomes a technical marvel. The pyrotechnics involved are nothing short of astonishing, and hell, even I was surprised at some of the stunt work involving Barrymore. They certainly make films differently these days. Most of the stuff presented in the final act would never be attempted today. It's a guarantee that it would all be done with CGI, and would never have the same organic feel that this film is able to accomplish.

If I had any gripes, it would be that most of the cool fire action doesn't happen until the very end. But you know, I half expected that, so it's not that much of a bummer. There are plenty of moments where Charlie (Barrymore) and her father Andy (David Keith) display their particular talents, but it's really not until the last 30 minutes where she really let's loose and well, it's a flat-out awesome display.

By no means a film that will blow you away, yet an exceptionally well made film that perfectly captures the aesthetic of the early 80's. It has it's lull's, but recovers in it's final act to deliver one helluva finale. I'm so glad they never attempted to remake this.
Posted by robotGEEK at 7:13 AM