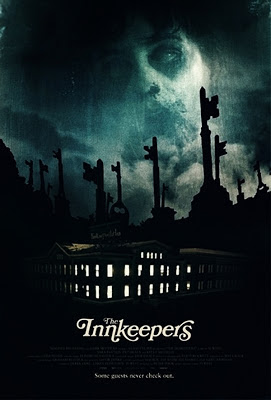 So you may have noticed that these have become increasingly short and not very thorough. For that I do apologize. As much as I love watching these films, I just don't have the time to write about them as much as I want, and now I am in the middle of a move and it will get harder. So that's what these "Quick Shot's" are all about. I just want to in the least be able to throw out some quick thoughts on them before I forget I even saw them. At my age, it happens. If time permits, I will delve deeper into these, but for now I hope these quick little blurbs will not annoy you too much.


Ever since the excellent The House of the Devil, Ti West will always be a name to look out for. Sure he'd made a few films before that one, but it was that film that really put him on the map by creating an eerily authentic horror film reminiscent of some of the best stuff from the late 70's to early 80's. I mean, it honest to goodness looks and feels like it came right outta the 70's, and I love it.

So then I heard he was making another horror independent horror film about a haunted hotel and well, of course I got excited. A lot of the feedback I read about this was mainly about Kelly McGillis's performance, and I must say she was quite excellent. Almost completely unrecognizable for a while until I realized it was in fact her. But she was great, as was the rest of the minimal cast.

With that being said, I can't say that I was as impressed with this one as his last outing, or that I enjoyed it as much. Just as House of the Devil was, this is a very slow burn kinda film, and while that's fine and all when done well, I have to say that I was also a little bored from time to time. Which isn't a bad thing if other elements of the film pay off, but I just didn't feel they did with this one. The "haunting" aspects of the film were okay, but didn't really feel the ending was all that great. I know, it sounds like I'm bashing this thing, and it's not bad at all. I just wasn't really entertained with it as I had hoped to be I guess.

Basic premise goes as this, two employees of an old hotel that's about to close decide to see if they can capture any "haunting" on film as the hotel has a reputation for being haunted, with one of the employees even creating a website to document these occurrences. On the last night a few customers check in, and eerie things start happening.

Very well made, and the cast was great. The effects, of what little there were, were decent. Overall, a nice moody little horror film.
Posted by robotGEEK at 6:25 AM