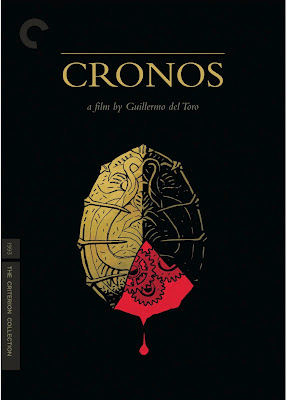 del Toro is one of my favorite filmmakers today. He remains one of the last filmmakers whose use of traditional and practical effects, while mixed with outstanding digital effects, give his films more of an organic look and feel. While the majority of filmmakers lean more towards 100% digital these days, he's always been a strong supporter of old fashioned puppetry and practical makeup effects, which just makes him awesome.

Ah, enough of that and on to Cronos. You know, I never got around to watching this one. I always remember seeing that dreadful VHS cover for so many years, and it wasn't until a few years ago that I was even aware that del Toro was behind this. That cover man, it's pretty bad. I'm sure that's the reason I stayed away from it, and after finally seeing the film, I see that that particular lame VHS cover is a total misrepresentation of the film in general. First of all, that chick on the cover isn't even in the film! But this new cover from Criterion is just awesome and speaks volumes about the film as a whole.

I had no idea what I had in store for me. I knew nothing of the story or the cast. And just based on the title alone, I was expecting some sort of sci-fi fable/thriller maybe. Or something to do with bugs? But what I got was something entirely different, and very refreshing. One of the things I noticed immediately was that this is a small film, and only hints at del Toro's brilliance as a filmmaker. It doesn't possess his trademark style, or even much of his standard color palette, but it does offer a solid piece of Independent filmmaking and a very enjoyable one full of mood, atmosphere and a constant sense of dread.

I don't want to necessarily offer a synopsis because I didn't know anything about this and I think I enjoyed it a whole lot more that way. What I will say is that this was a great little hybrid film, as done only the way Guillermo del Toro can do it. Not as ambitious as say Pan's Labyrinth, not by a long shot, but it's very well done with a clever script. One of the more surprising elements for me was that it had none other than del Toro regular Ron Pearlman in this. Again, totally surprised by this since it's technically a Spanish film (yea I know he was also in City of Lost Children - a French film), but I just wasn't expecting it. Sue me.

Sooooooo I'm done. Just wanted to put my two cents in and hope to entice someone else to check this out soon. I'm surprised it took me so long to discover this, and I think it mainly has to do with Criterion's new cover art, to be frank. Brilliant decision on their part.
Posted by robotGEEK at 7:03 AM