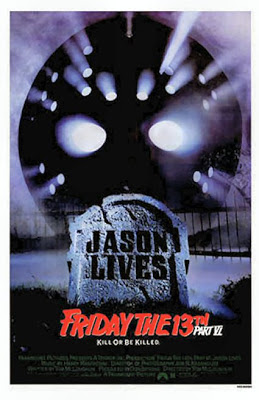 Wow. What a complete 180 from the last entry in this series. I have to say, Part 5: A New Beginning left a really bad taste in my mouth, as you can tell from my review of that piece of crap. But this one more than makes up for it. In fact, next to Part 4: The Final Chapter, I can easily say this one is my second favorite to date.

Now I should remind you, I have in fact seen all of these before, except for the first one and Jason X, but it was so long ago that I remember almost nothing about them. So it's almost like watching them for the first time, which is really exciting. What stands out from my memories of this one the most was that when it was released, MTV had a badass Alice Cooper video with clips from the film in it and I always remember loving it. Especially of that cool shot of Jason emerging from the wrecked RV after it crashed on the highway. Awesome. Aaaaand, they actually do play that Alice Cooper song in the film, albeit in the end credits.

So yea, I loved every second of this one. Right from it's opening frame down to the last shot. This was a blast from beginning to end. Unlike the last one, this had a certain tongue-in-cheek humor "purposely" injected into the action and horror elements that make such a difference in the tone. Throw in a rad James Bond style opening title sequence, a cameo by Horshack (Ron Pallilo) and Tony Goldwyn (Ghost), and the always reliable Thom Mathews (Return of the Living Dead) taking over the role of Tommy (Thank Gawd!), and you've got one helluva good Jason film here.

Long story short, Tommy still can't get over what Jason did to him in Part 4: The Final Chapter. As an adult male now, he's pretty fucked up about it still. So he takes his buddy over to Jason's grave to burn him to a crisp and make sure he's dead once and for all. But wouldn't you know, a storm starts a brewin' and with a bolt of lightning to the heart by a strategically placed metal rod, Jason is reborn a la Frankenstein and begins his reign of terror once again. Love it!

I had always thought Kane Hodder took over the role of Jason in this one, but it appears I was wrong (doesn't take over the role of Jason till Part 7), which sucks because I actually thought the guy portraying Jason here was badass. He walks with such a ferociousness that it's just fuckin' scary. And director Tom McLouglin makes it a point to show how ferocious by having lots and lots of shots of Jason walking, roaming and chasing. And though he's not as bulky as the type of Jason we're used to, he's still big and intimidating. The kills were also fun in this one. Not as bloody or as gory as some of the past in the series, but more inventive and certainly more plentiful than what I remember from the last one. Shit, I need to stop hatin' on Part 5 so much. Anyway...........

This is another perfect example and a sad reminder of how great horror movies were in the 80's and where they are now. Speaking of which, I was surprised to see that writer/director Tom McLoughlin, who does such an amazing job on this one, hasn't really ever done anything like this either since this one. Okay, so he did do a few episodes of the Friday the 13th TV series, but does that really count? What a shame too, because he easily give this film a great look, feel and tone that you would have thought this was a genre he had worked in for years before and after this release. But that doesn't seem to be the case, except for one horror film early in his career, he's mainly stuck to television work. Again, such a shame. This guy's got some serious talent, why doesn't anybody else seem to see that?

So to cap this off, I loved this one to death, making it my favorite one next to Part 4.

A special thanks to Mitch over at The Video Vacuum for the words of encouragement. :)
Posted by robotGEEK at 10:13 PM