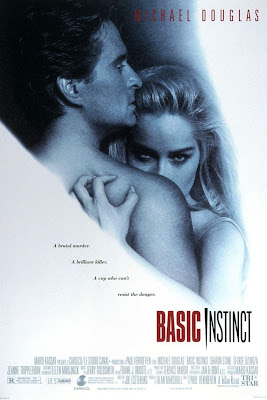 Can you believe I hadn't seen this until recently? I know, shame on me. It's weird how the universe works sometimes. This was just one of those that always seemed to pass me by. Even the promise of excessive nudity and Sharon Stones crotch shot wasn't enough to get me to make the effort to watch this. Not that I "didn't" want to, I just always seem to go with something else. But I finally sat my ass down to give it a shot, so here we go.

Here he plays a cop who's investigating a local author who may or may not also be a killer. Of course, he's ultimately seduced by her because she just has that way with people, male and female, and his life becomes much more complicated as he dives head first into a plot of sex and murder where everyone is a suspect.

I felt a lot of elements in here to be pretty cheesy, but it's taken so seriously and done so well by director Paul Verhoeven that you just don't care, it's still a fun ride. Best of all, when the violence kicks in, you can bet your ass it's going to be bloody and over the top, with the sex and nudity being gratuitous, and I just can't stress enough how much of a badass Michael Douglas was in this. Artistically, I feel Verhoeven knocked this one out of the park. It's just a really slick piece of filmmaking. Great style, score, ensemble cast, feel and oh yea, Sharon Stone is naked a lot. As incredibly predictable as this was from beginning to end, I still had a blast with it. Very fun and intense cop thriller with an outstanding cast all around. I can't believe I waited so long to see this.
Posted by robotGEEK at 2:32 PM