Quick Shot: Belly of the Beast 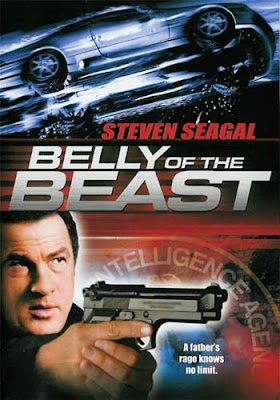 I should mention right off the bat that as a Seagal fan, I do not like most of his DTV output at all, and if I'm to be perfectly frank, I haven't seen a whole lot of them either because I just don't want to. The ones I have seen are just terrible, where all I end up doing is asking a million questions instead of trying to enjoy the damn thing like "Why do they have someone else dubbing his voice who sounds nothing like him?".

But anyway, I read a very favorable review of this in Seagology: The Ass-Kicking films of Steven Seagal by Badass Cinema reviewer Vern, an awesome read by the way and strongly suggested, and you know, I have to agree with him. This is so much better than you expect it to be and a helluva lot better than 99% of his DTV output in general. I think a lot of that has to do with director Siu-Tung Ching, a Hong Kong action choreographer, action director, stunt coordinator and film director who's worked on some pretty impressive big budget films. But this has a much more polished look and feel than so many of his other films that it's immediately apparent right from the beginning. For me, that makes for a much more enjoyable experience. And it definitely has an authentic Hong Kong feel to it, with even a few dashes of brilliance in the action sequences.

So yea, the first thing you'll notice when this starts is that it just looks badass, because it is. It actually ends up being a pretty good piece of Badass Cinema.
The second thing you'll notice is that Seagal just looks terrible. Up until this point, I can't remember him looking this bad. He's huge and looks so completely out of shape, which is sad if you're an action star, am I right? I mean, is it that hard to hire a personal trainer to a least get you in semi-good shape. We all know he can afford it. You can't honestly expect us to believe he can do any of the shit he "supposedly" does in this in the shape he's in. I say "supposedly" because it's painstakingly obvious he uses a double for most of action sequences. Though there is one hilarious scene in the beginning where he does a summer-salt and they make damn sure you can tell it's him, though it looked completely painful to do if you read the expression on his face.
Third thing  you'll also notice is that this cover art just doesn't represent this film very well at all. I don't remember a car, or one flying through the air for that matter, and either they used an old picture of Seagal, or photoshopped it like crazy because he does not look like that in the film. But whatever.

The story is just plain ridiculous and silly and oddly goes off into other things here and there making it sometimes incoherent and overly complicated, as is the standard for most of these Seagal DTV films. And you know what? I have no idea what "Belly of the Beast" even refers to because it doesn't seem to fit this film at all, but whatever. It's an easy name to remember.

Without getting into the complicated storyline, basically his daughter is kidnapped and held for ransom in another country and he goes off to rescue her. But who really cares? I just wanted to see a good Seagal flick and this certainly delivers. Cool action sequences aplenty, some truly badass moments and a slick look easily raises this one far above a lot of his others from this era. I enjoyed it, I hope you will too.
Posted by robotGEEK at 8:16 AM