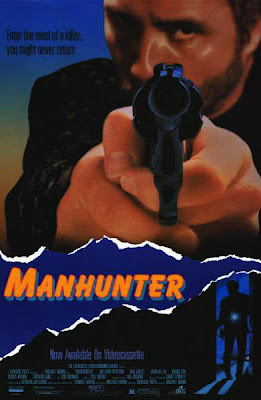 First and foremost:
I would like to take a quick moment to apologize for the lack of postings of late. I have recently found a new passion (photography) and have also re-acquainted myself with an old passion (drawing) and I've dove into these mediums full force. Yet I still continue to watch an insane amount of films, just not really having the time to sit down and do a thorough review on them. So this will be a new format I would like to call "Quick Shot", basically meaning Mini Review. I have a handful I will be posting like this just so I can get these suckers out before they start building to such a ridiculous number that I would just give up on them altogether. So I hope you don't mind the shorter format, but at least it's something. So now, back to my first Quick Shot review, the awesome title Manhunter, a movie looooong overdue for a viewing.

You gotta respect a film, and a Hannibal Lecter film for that matter, that ends with Iron Butterfly's In-a-gadda-da-vida blaring over the finale. A pretty outstanding finale I might add.

First off, I need to admit something. I'd never seen this until now. I know, I know.....for shame. Honestly, I'd never seen anything about it and it wasn't until seeing some of Mann's earlier stuff that I got the bug to check this out. Thief and The Keep just blew me away. Two completely different types of films, but brilliant cinematic experiences by a truly gifted filmmaker. I figured if Manhunter was even half as good as those films, then I'd be in for a treat.

Manhunter didn't disappoint. In fact, I'd even go so far as to say that I prefer this to Silence of the Lambs and Red Dragon (the Thomas Harris book of which this was also based on). This is a solid and intelligent psychological thriller done the way that only someone of writer/director Michael Mann's caliber can deliver. I found the script quite intelligent, surprisingly. I think I was expecting something along the lines of an action thriller, when in fact there's no real action at all. It's a psychological mindgame that takes up the majority of the films running time, but done with an 80's pizzazz. I think if this had been made today, it wouldn't have the same effect, but having been made in the mid to late 80's, it has that special something that gives it the perfect edge to make this ever so enjoyable.

William Peterson, all brooding and and serious, carries the film quite well. As the recently retired FBI profiler Will Graham who gets pulled back into the job at the request of his old friend Jack Crawford (Dennis Farina), Peterson plays him as a very unlikable character with a severe case of OCD. In fact, he's an asshole plain and simple and he doesn't care who thinks so. Tom Noonan as the "Tooth Fairy Killer" was great. Only, I must have seen the theatrical cut and not the Extended or Directors Cut because I keep seeing pictures of him shirtless sporting an impressively badass chest and back tattoo, yet there were no such scenes in the cut I saw sadly. So it looks like I'll be forking over some cash for this Extended Cut, which is fine because I need to own this film. It's an essential.

Did I mention during the harrowing and riveting finale that Iron Butterfly's In-a-gadda-da-vida is blaring through your speakers? Awesome. Just awesome.
So after doing some digging, I see there are at least 3 different cuts of this film. I know I must have seen the Theatrical Cut, so it looks like of all the versions out there, this 2003 Divimax Restored Directors Cut release looks like the best way to go. Get it, that's all I'm gonna say. It rules.

P.S. I really wish Mann was making more films like this. I don't really dig his new style of filmmaking at all.
Posted by robotGEEK at 12:54 PM