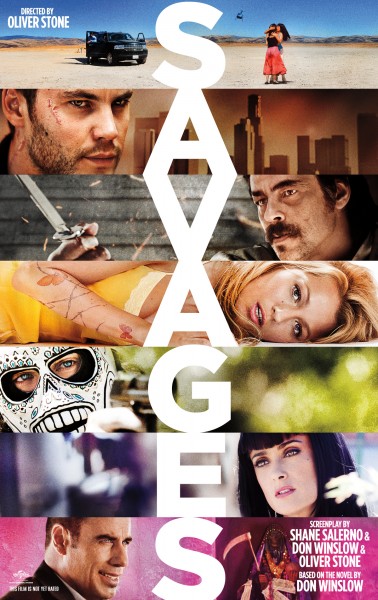 I went into this thinking, simply based on the trailers alone, that this was going to be something similar to True Romance, or a cross between True Romance and Natural Born Killers. This is not that kind of film, even though you're kinda led to believe this. It's a good flick mind you, just not the type I was expecting.

Here we have Oliver Stone returning "somewhat" to his former directing style. Sure he throws in some of his hyper-active new style of camera tricks here and there, but he's surprisingly restrained here, yet still not achieving the visual greatness of some of his earlier and better films. Complaining aside, it's indeed a noble effort and I must commend him for not converting back to his NBK style of filmmaking.

The best thing Savages has going for it is it's ensemble cast. This cast is amazing. I keep reading a lot of shit about Taylor Kitsch as an actor. How he's the one anchor responsible for two of this summer's biggest flops, but I think he's a kick ass actor. Maybe he's not ready to be the summer blockbuster leading man the studios had hoped, but in a supporting role, especially this one, he's killer. Technically Kitsch, Blake Lively and Aaron Johnson are the leads here, but Benicio Del Toro, Salma Hayek and John Travolta own this fucking movie. Every single scene they are in "makes" Savages what it is, Del Toro in particular. The guy's a sick fucking bastard, yet surprisingly likable at the same time, even garnering some laughs from you at some of the most disturbing sequences.

I was surprised to see that there wasn't nearly as much action as I was expecting, and that it maybe ran a little longer than it needed to. The cast is great, the look and sometimes gritty feel is pretty decent, but there felt like times when it seemed to drag on and on when it didn't need to, and maybe some decent bursts of violence and action would have broken up the monotony, at least for me anyway, but if you take it for what it is, then you won't be let down. I found the ending, and then the surprise semi-twist to be entertaining enough to make up for the lack of any excitement during the long stretches in the mid section. But it's really Del Toro, Hayek and Travolta's performances that really elevate this thing. If they weren't in here, I doubt this would be as watchable as it is. They really brought their A Game in here.

To wrap it up, this wasn't the badass shoot 'em up Oliver Stone film I was hoping for. It's not bad, but it's not great either. This seems more like a matinee or discount cinema type film, so save your money or just wait for it to hit DVD or Netflix. Oh, and I had no idea Travolta was actually going bald. I'm totally serious. I couldn't believe it. I'd heard rumors, but I'd never actually seen a picture of him like that before. I know he's always had some weird hairstyle going on in almost every film he's in, but it was surprising to see him finally admit it and just let show on the big screen.
Posted by robotGEEK at 1:04 PM