Quick Shot: The Man Who Wasn't There 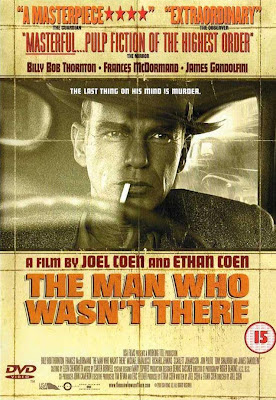 One thing's for sure. Only the Coen Brothers are able to pull of making films like this. I felt the same way when I saw A Serious Man. If anybody else had attempted to take the concept of that film and it's script to a studio, I doubt they would have ever greenlit the thing. But the Coen Brother's can pretty much do anything they want, so they do.

If you're looking for a slow burn kinda film to put you to sleep, this is it. It's not bad at all, just very uneventful, yet it looks beautiful and has a pretty outstanding cast, which makes it hard to hate on it too much.

This was a Coen Brother's entry that I just had no desire to see when it came out. Even the trailers didn't make it look the least bit interesting. I can dig Billy Bob in some roles, but having to sit through an entire movie where he hardly utters a word or express any real kind of emotion just didn't really peak my interest. Did I mention he also narrates the entire film in a monotone drull? And before you jump down my throat, yes I know what kind of film this is supposed to be, I get it. I just didn't dig it. Would it have been any better with someone other than Billy Bob in the lead? I don't know. And while we're on the subject, the Coen Brother's seem to be hit or miss with me. They have a good handful of films I have yet to see because I just have no interest. But I respect them as filmmakers because they have come to make films their way and on their terms, somehow beating the Hollywood system. I must admit though, I do enjoy the majority of their output because they've turned out some pretty amazing films in their long career. The type of films not a lot of other filmmakers could make successfully.

Buuuut whatever. Visually impressive film with style to burn, just not a lot of substance for my taste.
Posted by robotGEEK at 3:57 PM