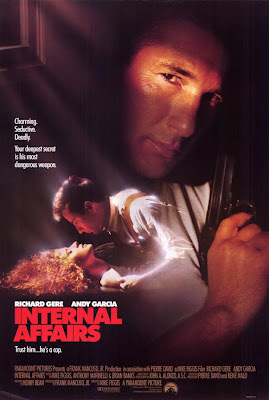 Richard fuckin' Gere man. What a bastard he is in this movie. When this first came out, I was too young to really appreciate it. Some of these kinds of films always stood out in my head from this time period, even at a young age, like Black Rain or Blue Steel. But a lot of these passed me by and it's only now that I can fully appreciate the awesomeness of these kinds of films. And this one is good. This one is really fuckin' good.

I love these kinds of films. I'm finding myself digging and scouring the late 80's to early 90's for such treasures and boy have I found some gems. It's amazing that these kinds of films were made, and made a particular way, rampantly in this era. A really great one I just had the pleasure of watching for the very first time was Michael Mann's excellent Manhunter. Oh to be the age I am now and to have the opportunity to see these films in the theater.

Internal Affairs tells the story of a corrupt cop named Dennis Peck (Richard Gere) and the Internal Affairs agent (Andy Garcia) assigned to investigate a case within the Los Angeles police force. Soon though, he sets his sights on Peck and uncovers a much bigger case than he could have imagined.

What I liked about this is that it's pretty straight forward. It's not over stylized or anything like that, and it's pretty devoid of any unnecessary fluff. The main draw here though is Gere and Garcia. These guys bring their A game and pull of some pretty damn impressive performances. Gere as the diabolical, conniving and just plain evil LA police officer Dennis Peck, and Garcia as the dedicated and passionate IA agent who sets his sights on Peck soon after being assigned to investigate a case involving one of Peck's fellow officers. I think what surprised me the most is that I'm just not used to seeing Richard Gere like this. Man, he is really fucking evil in this and the worst part is that he's such a charmer that he often gets away with it. He knows how to manipulate people and get inside their head, a technique he uses to ultimately get inside agent Raymond Avilla's (Andy Garcia) head that brings out his personal problems and inner demons for all the world to see. It also helps that he's incredibly good looking.

This is a taut and tense crime thriller of the best caliber. Great story. Great performances and a great look keep you hooked from beginning to end, even if it felt it maybe ran a tad too long. Speaking of the great cast, I just loved the casting of Laurie Metcalf as agent Avilla's new partner. She was outstanding in this role and I couldn't imagine anybody else pulling it off as well as she did.
Posted by robotGEEK at 2:01 PM