Tubi Tuesday Presents: Into the Night (1985) 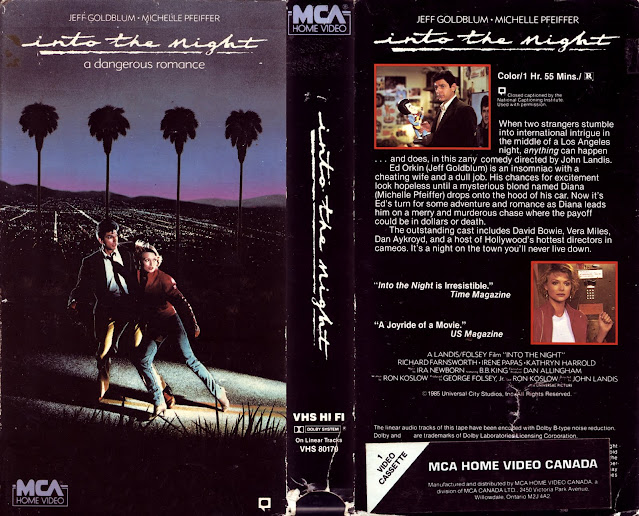 A Brilliant, Dark, Twisted Odyssey Through The Streets of L.A.

If you're ever in the mood for a bizarre, surreal and highly entertaining under-the-radar gem, then this film is for you. Brilliantly directed by John Landis, the same year he directed Spies Like Us, Into the Night is like the L.A. version of Martin Scorsese's After Hours. It's a surreal, sometimes nightmarish, sometimes odd and sometimes hilarious odyssey through the streets of L.A. via 1985 as an insomniac (Jeff Goldblum), meets and tries to help a beautiful young woman (Michelle Pfeiffer) as she's being chased by a random assortment of people over the course of a single night.

As you'd expect with any Landis film, it's filled to the brim with amazing cameo's, some more subtle than others, and an insanely eclectic cast, including the late-great David Bowie as a hitman. I'm telling you, it's fucking great. I happened upon this film by accident a few years ago. One day I was casually browsing the Laserdisc section on eBay, and stumbled upon this. I was immediately drawn to it because it was a John Landis and Jeff Goldblum film I had never heard of before, so that Laserdisc was a blind-buy for me. When we threw it on one lazy Sunday afternoon, we were floored by not only how entertaining it was, but how good it was too. Make no mistake, it's not your conventional film. It's so strange, but in the most delightful way possible. It takes huge risks in both it's approach to its story and structure, and John Landis shoots the hell out of this thing. It's a gorgeous film to look at. It's a shame he's kind of a terrible person in real life, an egomaniac and well, we know the rest. But he sure was one helluva director in his prime, even through his legal and personal troubles in the 80's.

Streaming for FREE (with commercials) in HD on TubiTV