The Wraith Coming to Blu-Ray! 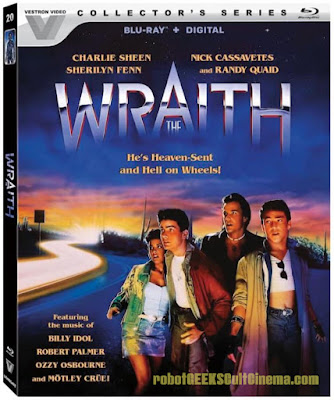 by robotGEEK
It's been a looooong road to get here, but the cult classic The Wraith is finally making it's debut on Blu-Ray for the first time in the U.S. via Vestron's Collector's Series label.

Released in 1986, this cult classic with the killer soundtrack has been released on nearly every other format other than Blu Ray here in the states until now. It has technically already gotten the Blu Ray treatment though in other regions like Japan, Spain and Germany, with far cooler cover art I might add. But they don't have the extras that will be included in this release, so for some that, along with the low price point of just $17, will be enough for most people to either double-dip or blindly buy this new release.

Here are the new extras included in this release:

BLU-RAY SPECIAL FEATURES
Audio Commentary with Writer-Director Mike Marvin
Audio Commentary with Actors Dave Sherrill and Jamie Bozian
“Tales from the Desert” — An Interview with Writer-Director Mike Marvin
“Rughead Speaks!” — An Interview with Actor Clint Howard
“Ride of the Future” — Interviews with Stunt Coordinator Buddy Joe Hooker and Transportation Coordinator Gary Hellerstein
“The Ghost Car” — Interviews with Visual Effects Producer Peter Kuran and Effects Animator Kevin Kutchaver
Isolated Score Selections Featuring Audio Interview with Co-Composer J. Peter Robinson
“The Wraith Filming Locations: Then and Now” Featurette
Alternate Title Sequence
Still Gallery
Theatrical Trailer
TV Spots
Amazon already has this up for pre-order at an insanely reasonable price, which you can find HERE. Already got mine ordered! The Wraith is set for release July 20th.
Also, please remember to subscribe to my new YouTube Channel. I'm an amateur at it, but slowly making progress and getting there. You can subscribe HERE.
It would mean the world to me. Thank you!
Posted by robotGEEK at 10:04 AM