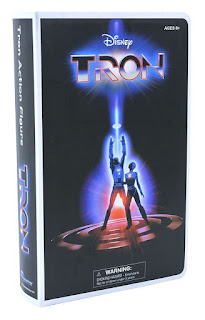 Your first thought is probably "but we didn't have a Comic Con this year", and you would be correct. Though they still held something of a "virtual" Comic Con, I have no idea how that even worked out in the grande scheme of things, but the initial reports are that it was a mixed bag. But you know, they tried with what they had in a time when things were rapidly changing with the pandemic and they didn't know whether it was going to happen at all or not. But moving on.

A lot of the reveals weren't all that interesting to me personally, but this certainly was. This is a Tron action figure, in his red neon (later changed to blue for the movie) costume based on the promotional poster before the film was released. As we all know, they decided to change it to blue for the movie. This figure comes in a sick and SLICK VHS-style clamshell packaging and maaaaaan, I am all about this! He also comes with 5 different discs and a Tron stand for the figure. This figure is set to release in August of this year (just around the corner!!) and once again comes from the mighty folks at Diamond Select, who did the previous Tron Walgreens Exclusive figures from earlier this year.....which are amazing!

Before you get excited, I have to tell you that from what I could tell, all pre-orders are already generally SOLD OUT on every online marketplace I would normally order these from like Entertainment Earth and Big Bad Toy Store. Diamond Select Toys official website looks like they actually have them in stock, but I don't know if their site is currently updated or if that changes once you sign in. You'd have to try ordering and see what happens. You can do that HERE. There is however eBay, which is really a place a lot of us don't like to buy these from because the sellers always ask far more than what you should have to pay for them.

And how are there some already available on eBay? A lot of them are from comic shops or businesses who were set to actually be set up at Comic Con this year, so they were able to get their hands on a certain amount that were allowed to be sold at the event. Since there was no convention, they then go to eBay. And really, this situation is different. Unlike flippers who buy them and resell them for double or triple the price, they're actually close to the original retail cost last I checked. And that's where I purchased mine. Now there are flippers on there, those who got their "pre-orders" in before they sold out everywhere and those are the ones who will be providing their "pre-order" confirmations to prove that they do in fact have one arriving when they are officially released next month. For your information, the regular retail price for these is $40. 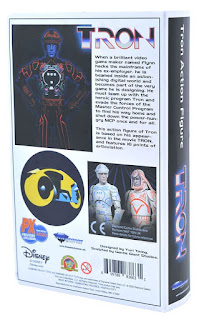 If I were you, I'd grab one ASAP as they're already a hot item and hard to get officially. The prices on eBay are not bad at all right now. You can find them ranging anywhere from $40 (retail) to around $55. Some offer FREE Shipping and some don't, but even with shipping, it's not too bad.

It still blows my mind that as big a collector as I am today for these things, I am so out of the loop. I don't know where everyone gets their information on all these upcoming releases, but as far as this figure goes, I only found out about it because I was looking up something else entirely on eBay one night and this strangely showed up in the listings. When I saw "Tron SDCC 2020" in the title, I did a quick search and that's how I discovered this was even in existence. Otherwise I don't think I would have even known. Nobody ever thinks to tell me or keep me in the loop! I discovered this by accident! It just so happened to be on the same weekend it was actually released virtually as part of SDCC's Virtual Con, so I got lucky. 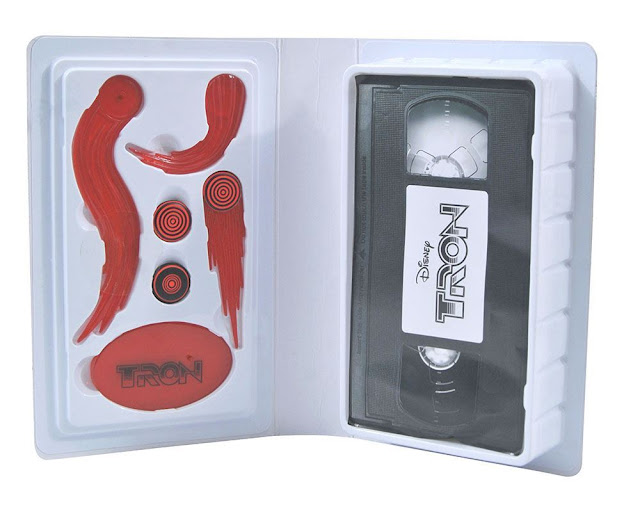 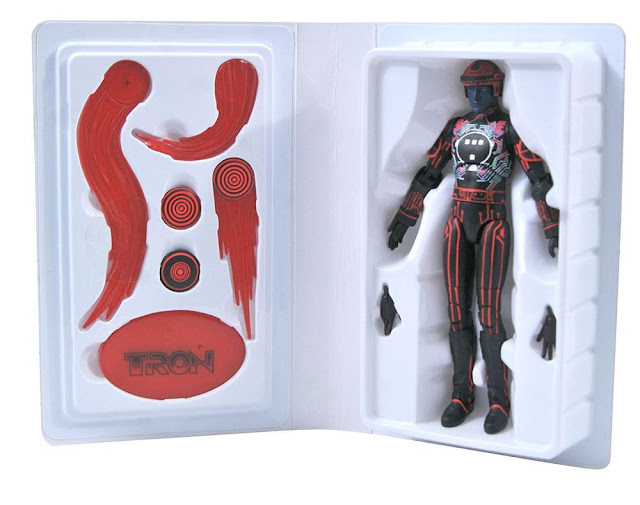