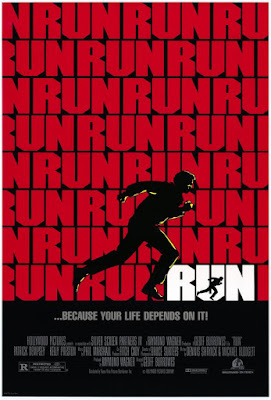 A Superb Action Thriller That Showcases Patrick Dempsey's Ability to Run, Quite Literally, For His Life

I have a very distinct memory of the marketing of this film. I remember the trailers showing a young and skinny Patrick Dempsey (after a series of popular 80's chick flicks) running for his life, car crashes, gun shots and a cool looking font for the simple title. I also remember it just sort of coming and going with little to no attention, which surprises me because as I finally sit down to watch it for the first time, it's quite an excellent little thriller.

A cocky young law student is transporting a Porsche to a client long distance when it breaks down in a city he's not familiar with. Through a series of events, he gets into a fight with a local mob boss's son, accidentally killing him. Now he's running for his life with a bounty on his head as both the mob and a corrupt police force are after him.

Run is pretty much exactly what I want when I sit down for a thriller, and literally represents the best of what this genre has to offer. It hits the ground running, literally wasting no time in throwing you into the crazy ride that you're about to take. Written by veteran screenwriter Dennis Shryack (The Gauntlet, Pale Rider, Code of Silence, Turner & Hooch and a personal favorite of mine Fifty/Fifty), Run is a nonstop series of death-defying sequences full of car chases, shootouts, and so many near-death close calls that you start to chuckle a little bit because Patrick Dempsey's Charlie Farrow would have died in any one of those sequences. But that lack of realism doesn't make a damn bit of difference because it's an exceptionally fun ride from start to finish. 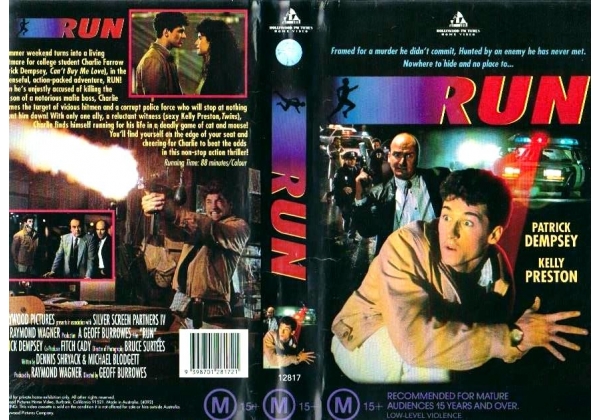 Dempsey's characters is so overly arrogant right off the bat that you just know some bad shit is going to put him in his place rather quickly, and boy does he get run through the paces. When he's not being shot at or chased by cars, he gets the shit physically beat out of him pretty regularly throughout the film and somehow manages to remain upbeat, snarky and rarely ever gets a scratch on him. And I have to give it to Dempsey, this is a physically demanding role and its shocking apparent he did a lot of the stunts himself, which honestly makes it more badass. This one sequence involving a police car in a 5 story parking garage in particular sticks out. But even with the little stuff, like being thrown against a wall clear across a room, stack of tables, chairs or on the hood of a car by men twice his size, and clearly seeing it's him and not a double, is impressive.

Despite it's clever and fast-paced script, a lot of what makes Run so good is director Geoff Burrow's impeccable direction and cinematographer Bruce Surtees' camerawork. For a guy who'd only directed a single film before this, 1988's Return to Snowy River, Burrowes displays a natural talent behind the camera. Seriously, after watching this you'd just assume he'd done this many, many times before because he's so goddamn good at it, but nope. Run carries a slick, straightforward approach that lets the stunts and action take center stage. But even then, you sense an aesthetic sheen that makes it all look so good. I mean, we're not talking Black Rain level of visuals, but for something that easily could have looked like a Made-for-TV movie, Run is brilliantly visual and looks and feels much larger than it actually is. And that's all thanks to director Geoff Burrowes and Cinematographer Bruce Surtees (Sudden Impact, Pale Rider, License to Drive, Beverly Hills Cop). Now that I think about it, I'm sure it's more Surtees who deserves the accolades here.

Run is a quick, exhilarating and fun hour and a half that will surprise you with how much they can squeeze out of a decent little budget. Run is currently streaming on Amazon Prime right now, but be warned, there are a handful of other films with the same title. Be sure to pick the one with that poster art, or the 1991 date attached to it.
Posted by robotGEEK at 11:22 AM