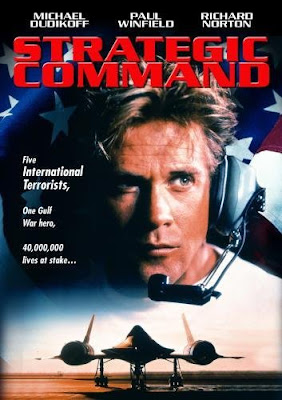 You would think that with all this time on my hands, that I'd have more time to be able to do these reviews, but for some reason it's been the opposite. I'm probably watching more movies than I have in ages, but because of my other hobbies, I'm finding it hard to sit down and write about them. Anyway, maybe the best way is to just make them short and quick. So here we go.

I came across this on Amazon Prime and right off the bat I'll tell you that it's good. It's damn good, just not as great as it could be and probably not the kind of film you're expecting. For starters, it's more a thriller than an action film; sort of a combination of Air Force One and Executive Decision, with maybe a dash of Passenger 57 thrown in for good measure.

It's an exceptionally well made film, and the cast is full of familiar faces, most notably a young Bryan Cranston (Breaking Bad) as a snotty television reporter who's also stuck on the plane with the hijackers. If anything, the constant who's who of character actors was a fun and pleasant surprise. I would have to say that really the only thing lacking, or where the film slightly falters is in the action department. There's not a whole lot of it, and the little fight scenes and action scenes there are, are less than thrilling and feel a bit rushed and uninspired compared to how well the rest of the film is put together. And this could all be because they were probably handled by a second unit director, someone with a different style of shooting than the actual director. If that's the case, it would explain a lot.

Richard Norton was a blast as the main villain/terrorist/hijacker. While it was a bit surprising to see him play the character straight, without any martial arts skills, it proves that hes one hell of an actor, and not just a skilled martial artist. Dudikoff, to his credit, does a fine job and carries the film effortlessly on his shoulders, and the rest of the cast is impressive. I just feel it needed a little more action, and it would have been nice if the little action we did get was handled a little more smoothly. But as it is, Strategic Command AKA Executive Command, offers a nice slice of 90's "Die Hard on a plane" thrills on a budget. I personally enjoyed it.


You can currently watch this on Amazon Prime and TubiTV.
Posted by robotGEEK at 1:30 PM