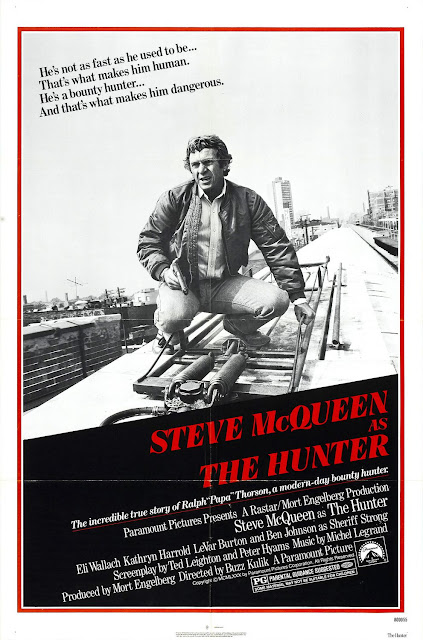 I'm going to be right up front with you and say that I have never seen a Steve McQueen film. At least, none that I can recall. Weird right? I can't explain it either, but it is what it is. I do realize thought that I need to rectify that, especially now with all this time we have on our hands.

McQueen plays Papa, a bounty hunter circa 1980 who tracks down bail jumpers, while also trying to maintain a relationship with his gorgeous, younger girlfriend who just so happens to be ready to give birth to their first child. In the middle of all this, a psycho from his past has resurfaced and is hell bent on killing him.

I found this to be enjoyable, but a far cry from what I was expecting, or to put it more bluntly, what it could have been. There are moments of greatness that are completely overshadowed by it's ho-hum approach, meandering endlessly from one insignificant subplot to another that never results in anything satisfying. It's as if this was intended to be a television series and they just decided to cut up a bunch of the episodes and turn it into a film. In the end, it should have been a television series or Made-for-TV movie because that's exactly what it feels like. There's never anything that justifies this being a theatrical release. Aside from it's ending, and a car chase involving a tractor, everything, including it's tone, is so mediocre here. There are so many plots going on at the same time, yet none of them connect. You're basically following him on his job tracking bail jumpers, and it almost feels like an entire episode could have been dedicated to all of these jobs/hunts he's on. Then there's the endless sequences involving his relationship with his live-in girlfriend who's just about ready to give birth and their endless list of issues involving commitment. There is so much happening that the storyline involving a killer who's after him, which should have been the main focus, is an nothing but an afterthought, barely registering as a plot device. If you were to combine all the minutes that are dedicated to this storyline, it would probably add up to about 15 minutes total, which is a shame because the killer, played by Tracey Walter (Batman 1989), is highly effective and he appears so infrequently that you forget about him until he randomly reappears an hour later.

It's a shame that this was McQueen's final film. I mean, it's entertaining in a television kind of way, but for a film that actually had a theatrical release, and for a film that ultimately would be his last due to his sudden death, The Hunter feels like such a wasted effort, not knowing what to do with itself or where to go. McQueen is great, all of the actors are great, but it lacks any kind of focus and punch.


The Hunter is currently streaming on Crackle for FREE as of this writing.
Posted by robotGEEK at 9:49 AM