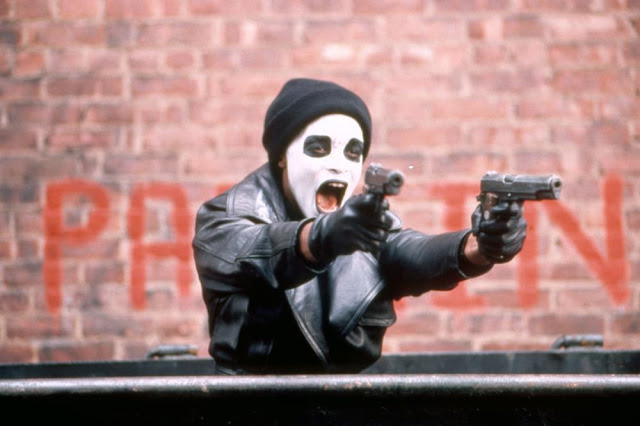 Dead Presidents is The Hughes Brother's love letter to Scorsese and De Palma. It's a beautiful, epic, sprawling and meticulously detailed crime/drama/thriller that shares a lot in common with Goodfellas, with a dash of De Palma's Untouchables thrown in for good measure, and it's a damn shame more people don't talk about this.

Released in 1995, the same year as Martin Scorsese's classic Casino, Dead Presidents would be The Hughes Brothers (Allen and Albert) sophomore effort after the well-received Menace II Society two years earlier. This is the kind of film that you just know was a passion project, doing their homework in what makes these types of films so good in the first place, and infusing it with their own specific style. And it works. It works masterfully.

Dead Presidents tells the story of a Vietnam vet (Larenz Tate) who comes back home from the service, complete with nightmares and finding it difficult to adjust back to civilian life. He can't seem to find a decent job and provide for his family in a neighborhood full of pimps and drug dealers, so he enlists the help of fellow war buddies Skip (Chris Tucker in a rare dramatic role), Jose (Freddy Rodriguez), and Cleon (Bokeem Woodbine) to pull off an armored truck heist. With the help of his mentor Kirby (Keith David), they set the plan in motion.

This has everything you'd want in a period crime drama and it's such a shame it's been largely forgotten. Of course, the Hughes Brother's have gone onto big things both together (The Book of Eli, From Hell), and separately as solo directors. It's got an incredibly authentic setting (mostly sticking to 1973), an amazing score by Danny Elfman in his prime, one of the best soundtracks I've ever heard in my life, full of mellow classic R & B jams that will having you hunting down that CD pronto, and a pace that keeps things moving along briskly, never slowing down enough to dwell on the drama too long. Here they reunite with their Menace II Society cinematographer Lisa Rinzler, and it's such a beautiful marriage of talents, producing some fantastic and epic visuals.

I remember going to the theater to see this back in '95, and just being completely floored by it. I hadn't yet seen their previous film, which is regarded as one of the best gang films out there, so going in cold I was just blown away. Everything comes together so perfectly. I immediately got the soundtrack on CD and it was in constant rotation in my car. I remember when it hit VHS, I played it over and over in my room. But life happens and I kind of forgot about it. So I can say it's been at least a good 20 years since I've seen it last. Having revisited it today, it hasn't lost an ounce of it's ability to impress me and I'd dare say it's only gotten better with age. It's a true crime masterpiece.

How to see it:
As far as I know, it still hasn't gotten a Blu Ray upgrade, so on physical media, DVD and VHS are the only options. But you're in luck! It's currently available to stream in HD for FREE on The Roku Channel. You just have to endure commercials.
Posted by robotGEEK at 1:29 PM