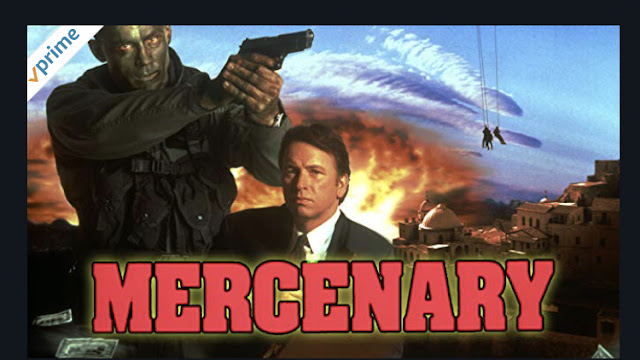 John Ritter as a Rich Businessman Tracking Down His Wife's Killers to the Middle East? I'm in

Randomly scrolling through Amazon's endless supply of low-budget 90's action flicks, I came across this one and was immediately intrigued by the idea of John Ritter, who we all fell in love with as Jack Tripper in Three's Company, costarring in an action film with Olivier Grunner (Nemesis, Angel Town). I mean, I didn't care who made it or how good or bad it was, I was sold simply on that idea alone. About a good 5 minutes in, I can honestly say I was not disappointed in the least bit.

Ritter stars as Jonas Ambler, a rich businessman who's wife is killed during a gala at their home by a band of terrorists. Hell bent on revenge, and with the finances to back it up, he enlists the help of a mercenary-for-hire named Karl "Hawk" May to help him track them down in the middle east and kill them. And the only way Hawk gets paid, is if he lets Ambler go with him. So begins some intense combat training of a very pampered tycoon, followed by a mission to kill these terrorists.

I have to say, I really, really enjoyed this. You never know what to expect with these low budget offerings, because more times than not, they're not any good. And I consider this genre to be one of my absolute favorites, so I tend to overlook a lot of the issues plaguing these films in general and end up enjoying them for what they are. But seriously, this one was fucking great. Right in the opening sequence, we're treated to not only an excellent setup for the events to follow with some impressive action, but to my surprise, we're introduced to a much better than I expected list of actors that I had no idea were in this, including Martin Kove, Robert Culp and Ed Lauter, but also a healthy selection of bad guys you most certainly recognize from other films.

As far as the film itself, it's far more entertaining than I was expecting, with a quality to it that impressed me more than anything. It's shot surprisingly well (for a low budget action film), and the action sequences are rather impressive. It's only downside is that in the last act of the film there is some horrendous CGI used during a nighttime helicopter chase through the mountains. I mean, it's really awful and incredibly cringe-inducing. I'm not sure why they would have even written something like that if the budget didn't back it up. Thankfully it's the only sequence (that I can remember) that nearly derailed it, and it's moderately brief before things get back to practical reality.

This is directed by Israeli filmmaker Avi Nesher, who's only other notable film would probably be 1991's Timebomb starring Michael Beihn, which I've heard is actually really good, but I still have yet to see. But simply based on this, he does a helluva job behind the camera giving the film a much larger look and feel on a small budget. That's something you rarely see in these. If it's a small budget, most of the time the director shoots fast and loose, with an insane amount of handheld camerawork, but not here. If it wasn't for the ridiculous helicopter sequence destroying any false notions of it's actual budget, I could easily see this being something of a limited theatrical release. I think it's time I finally tracked down Timebomb.

John Ritter does a surprisingly fine job as the arrogant and incredibly rich businessman, hell bent on exacting revenge. Sure he does a lot of scared screaming only the way Ritter can, but he was impressively dedicated to the role. Grunner, for his part, plays the character well and I have to admit, with each film I see him in, he gets better and better as an actor.

Mercenary isn't mind-blowing or anything, but its a helluva great time within this genre and much better overall than I was expecting going in. Mercenary is currently streaming on Amazon Prime.
Posted by robotGEEK at 10:24 AM