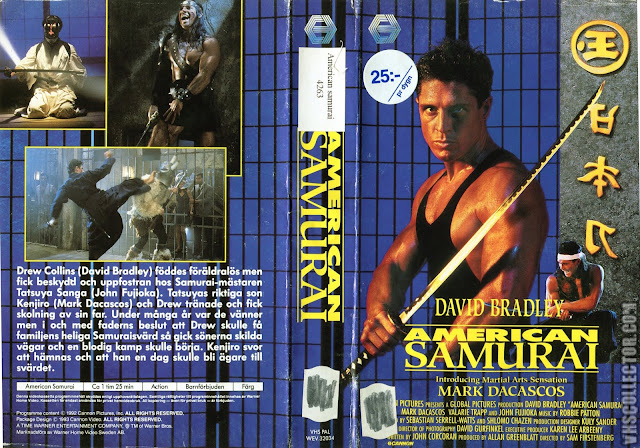 A Mix of Bloodsport with G.I. Joe's Storm Shadow and Snake Eyes' Tumultuous History, American Samurai Delivers The Goods in a Classic Way

Right smack in the middle of his run in the American Ninja franchise (which he'd taken over for Michael Dudikoff starting with Part 3), they decided to try and have him kickstart another martial arts franchise, this one centering on the samurai rather than the ninja. And while it failed to kickstart that new franchise, American Samurai is pretty much exactly what you'd expect, and that's not such a bad thing.

Released in 1992, they even went so far as to recruit regular ninja director Sam Firstenberg to helm. I mean, if you're going to hire anybody to take charge of this thing, who better than the guy who did American Ninja 1 & 2, Revenge of the Ninja and Ninja III: The Domination. For a guy who didn't initially have any interest in directing action films (bullshitting his way into it initially), he carved out a nice career path for himself for being one of the go-to guys to do these types of films in the 80's and 90's. With that being said, he has two types of films he makes; the unintentionally and hilariously awesome cheesy (American Ninja 2, Ninja III: The Domination), or the straightforward action flick (Avenging Force). This one falls into the latter, but just barely. While it's an entertaining film all around, it's never as cheesy as I was expecting. Which is fine honestly.

Something I was not expecting was a tournament movie, which was just one of several pleasant surprises I discovered. This is where it resembles a carbon copy of Bloodsport, right down to the white country, larger than life cowboy fighter he befriends. Here he's forced to fight an endless supply of fighters from all over the world in their own varying styles of combat. There's even a dude who looks like a smaller version of Conan, right down to that exact sword, who miraculously shows up in the following sequence after he just got killed in the tournament. Got to love low-budget editing!

Another aspect I was not expecting was Mark Dacascos being cast as the villain. Needless to say I knew nothing about this going in, so I was pleasantly surprised by a lot of what I found. Dacascos, one year before breaking out in the mainstream with Only The Strong, is so over the top as the incredibly angry brother to David Bradley's character; The Storm Shadow to Snake Eyes, that he literally makes this film as entertaining as it is. Having been brought up together and taught the way of the samurai since childhood, Dacascos is pure jealousy and rage towards his adoptive American brother that boils over to a tournament confrontation in the end to see who is in fact the best samurai. His constant angry faces and delivery is breathtakingly amusing, hilarious, awesome and a much needed dose of cheese that adds so much entertainment value to the mix. And I'm not teasing him. He genuinely makes this film as good as it is, because truthfully, David Bradley's character is so unlikable

A far better and entertaining film than I was expecting, American Samurai benefits from some impressive fight sequences and a villain played to perfection by Mark Dacascos, and in the capable hands of director Sam Firstenberg.  Another tournament film, yes, but a damn good one.
Posted by robotGEEK at 11:06 AM