Growing up, I was always aware of this show, but never got around to actually watching it. At the time, I was all about Knight Rider, The A-Team, The Fall Guy and sometimes Air Wolf. But this is why I love Hulu Plus so fucking much. They're all on there and I can watch them anytime I want. Anywho, as I was browsing recently Hunter was suggested to me, and at the time, I was smack in the middle of a long Miami Vice run and needing something a tad different in the 80's action genre to break up the monotony. I thought I'd at least give the hour and a half pilot a shot, if nothing else. 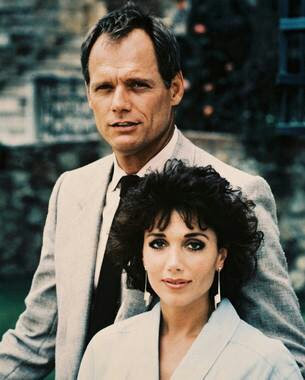 I'm so glad I did because Hunter was just fantastic and so much more than I was expecting. I'm only about 4 episodes into the first of 7 seasons, but what an opening! They really put so much into that pilot to grab you, and it worked. Essentially it feels like a cross between a Dirty Harry film and any of Charles Bronson's films from the 80's. Lead actor Fred Dryer even kind of looks, dresses and talks like Dirty Harry to be honest, only he's much more of a smartass 100% of the time, which really adds a lot to the likability factor to his character. He could easily have played it straight, which would have been ultimately forgettable, but because he's a smartass and always dropping quips and puns, it's far more effective in his character development and Dryer was a fantastic choice.

What would a good cop show be without an equally compelling partner? In this case, we have the smoking hot Stepfanie Kramer, who works really well as a counter-balance to Hunter's wisecracking antics. It also helps that we see her in tight skimpy outfits often (at least in the first few episodes I've seen so far) as she routinely goes undercover as a prostitute.

The pilot episode was a story about a serial killer who targeted women, with Hunter and his new partner trying to discover the identity of this killer and try and stop them before they killed again. A lot of this episode looked and felt like a slasher film, and I was constantly impressed with it's dark, gritty tone, action sequences and violence. The direction was pretty solid overall too, with some sequences being quite awesome, while others could have used some tweaking. Still, for a mid 80's television show, I was mightily impressed. And here's the clencher, the pilot costarred Brian Dennehy as a psychiatrist 2 years after he was going for Stallone's balls in First Blood. 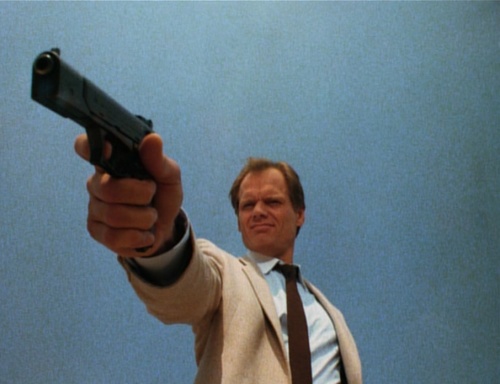 Speaking of cameos. Episode 3 was also amusing in that it costarred Sam J. Jones (Flash Gordon) and was directed by actor and future director Bill Duke (Predator, Commando).

I am absolutely loving this show - as much as I love Miami Vice, but in a different, more gritty and less polished way. I love that he's a smartass, and I appreciate the graphic tone, which I understand will shift and change with upcoming seasons. I'm also really enjoying the intro's and end credits. They're a funny and amusing reminder of how these shows used to be. With this one, they give you a preview of that particular episode during the opening credits, and the end credits give you a picture recap of what just happened. LOL. It's awesome.