A few months ago I was in a big James Bond binge, devouring all the Dalton and Brosnon 007 films and as many Roger Moore films as I could before I got burned out, which I eventually did. And I'd always been aware of George Lazenby as an actor and that he did play Bond just one single time, when Sean Connery gave up the role and they were looking for a worthy successor. I always wondered why it was just that one time though, and thankfully, this documentary spills out all of those juicy details. 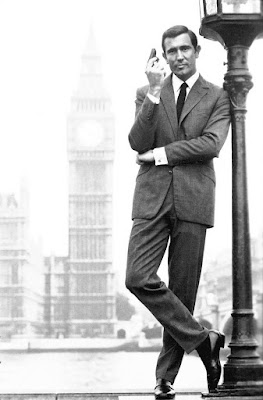 I'm a frequent user of Hulu Plus, I just love it. And when they recently added this to their list of new films, I was excited. I hadn't heard any buzz on it or anything, but I just felt it was going to be good, and boy was I right. Becoming Bond was hands-down one of the most entertaining documentaries I've seen in a while. Funny, charming and inventive, it's told by George Lazenby himself as he sits in front of the camera and tells his life story and how he ultimately became Bond. But what I found amusing was the fact that they would also have actors reenact these moments in his life, but it's done in such a satisfyingly heartfelt and poignant way that at times it feels like you're watching a movie, only narrated by the man himself, George Lazenby, and it's in these moments where Becoming Bond really, really shines. The actors do such a magnificent job in the roles of the real life people who would become integral parts of Lazenby's life, with actor Josh Lawson, who plays George as an adult, really bringing it all together in a knockout performance that's both touching and funny.

There's a moment about 30 minutes in when the director of the documentary has to stop Lazenby while he's speaking and says "Wait, I have to stop you right there. How much of this is true?", where Lazenby responds with "Which part?". The director: "All of it.". Lazenby: "How could it not be true if I remember it?". And that's a perfect example of how fantastical his life story is and how amazing of a story it ultimately becomes. What I found most surprising is that you don't even have to be a fan of the 007 franchise to enjoy this. If you enjoy a good documentary, then you will love this. Whether you're a fan of James Bond or not, that's really only a small part of his entire life story, which is a fascinating and incredible journey, made all the more amusing by a man who, whether you believe him or not, is likably arrogant and tells the story of his life in such a matter-of-fact way that you can't help but enjoy the ride. And what a wild ride it was.

Posted by robotGEEK at 3:10 PM