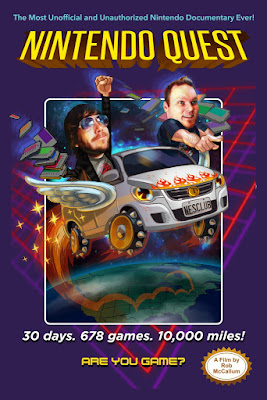 I'm always down for a good documentary, and this is one I'd been eyeing for a while when I first happened upon it on Hulu Plus a while ago. But I never actually got around to it, even though the NES is my all-time favorite console. I eventually forgot about it until I came across it again recently on Crackle. I took it as a sign to finally get off my ass and watch it already.

Avid game enthusiast and collector Jay Bartlett has 30 days to collect every single officially licensed Nintendo game released. He cannot order anything online, which means he has to grab each of the 678 games in person while driving cross-country. His good friend Robert McCallum is along for the ride to document it all.

Sadly, while amusing and entertaining for the most part, it doesn't quite hit the mark for me. It's a shame too, because it starts off really strong and the subject matter alone, original NES games, should be enough to grab just about any gamer. But this documentary suffers from a few problems that really prevents it from being awesome. For starters, the main focus of this documentary, Jay Barlett, just isn't a very compelling guy. At least not enough to follow around for an hour and a half. He's likable enough, but never really shows much of a personality or charisma, other than the moments when he gets upset about something. Some past trauma and personal issues also come to light. And then there's the amateurish look and feel to it all. While not terrible, it always comes across as a reality show rather than a documentary (yes there's a difference). The camera is constantly moving and swaying side to side, even in the transitional moments where the narrator and director is talking directly to the camera. In fact, this constant camera movement reminded me of a kids game show on Nickelodeon or something. And the other moments, where a small crew is following Jay as he visits friends and video game shops across the country are handled with little flair. It's as if whoever was behind the camera never filmed anything before. It's a slight annoyance, but one I personally couldn't look past.

The beginning of this doc is pretty excellent though, and I wish they had stuck to this format rather than what they chose. It starts by giving you an oral and visual history of Nintendo, from it's inception to it's dominance in the U.S. market to it's lasting impact on the video game market. It's really with this first section of the doc where it really, really shines and ultimately ends up being the most fun and best part of this documentary. Probably because it's quick and throws a lot of information at you in an entertaining way, while also incorporating a lot of old vintage footage. But as this was only McCallum's first documentary feature, I have to cut the guy some slack and hope his upcoming Masters of the Universe documentary, currently in post-production, will be a vast improvement tonally and in quality.

None of this means that it's bad either. On the contrary. It's engaging enough throughout if you're a fan of Nintendo or a vintage gamer. It's fun watching him find a lot of games I hadn't even thought of since their original release, and also discovering titles I never even knew existed. And of course, there are the rare and mega-rare titles. the ones we all hope to come across randomly some day. Here, we get to see Jay find these holy grail cartridges out on the hunt and through connections and the lengths some will go to for these.

Not one of the best, but not a terrible one either. It's enjoyable just for the mere fact that you get to see so many of these games again, especially if you either haven't played them in years or have completely forgotten about what it's like game hunting. Any other NES documentaries out there that I'm not aware of that you'd recommend? Please let me know!

How to see it:
It's since been removed from Hulu Plus, but if you want to stream it for free, you can watch it on Crackle. You just have to endure commercials from time to time. But that's a small price to pay to get to see it in digital for free. You can also purchase the DVD for relatively cheap. I'm sure it comes with bonus content too, so that would be a good way to go. But it's available for free on Crackle right now. I just don't know for how long.