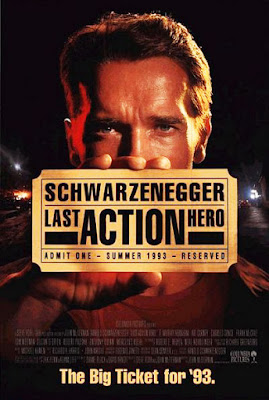 I'll be honest. There was just something about this film that never clicked with me. I went to the theater to see it, and I remember owning it on VHS, but I never remember actually loving it. I liked it enough to get it on tape when it came out, but I also remember that there were things about it that bugged me. For starters, at the time, I didn't like how John McTiernan had shot it. I felt it looked too gritty and it reminded me a lot of what he did with Die Hard 3 two years later, which I also didn't like at the time. And there were moments where his camerawork was just odd and goofy (I'll explain later), leaving me wondering just what the hell he was thinking? This was the same guy who directed legendary films like Predator and Die Hard? So I've pretty much avoided it for many, many years, not having the slightest itch to revisit it. But then all of a sudden I did out of nowhere. All of a sudden I really wanted to see this again and see if my initial feelings still rang true. I was close to purchasing a very cheap blu ray of it when I discovered it was currently for free on Crackle. Yes! So let's dig in.

I loved it. I absolutely loved every second of this. This was exactly what I was hoping for all those years ago, and it blows my mind that I just didn't "get it", or just didn't enjoy it until now. Truth is, it's a pretty great and highly clever film that does a fantastic job at giving us some highly entertaining action sequences, characters and plot, while also poking fun at itself. And I think that's part of what I just didn't get back in the day. Maybe it wasn't made clear enough in the marketing, so when I saw it I was confused? Who knows? That was a long time ago. I look at it now and it's painfully clear what their intent was and best of all, it works! So I have to ask, why did it bomb? Why was it a stain on Schwarzenegger's and McTiernan's career rather than a triumph?

Of all the things that surprised me upon this revisit, none of them more than my feelings towards John McTiernan's approach to directing in this one. It's beautiful and amazing and I feel like I understand why I might not have been a big fan of it before. Other than the one time I saw it in a theater, all of the other times were on VHS, in dreaded full frame/pan & scan. Upon this revisit, I was painfully aware that this is the kind of film that needs to be seen in widescreen. There were little moments that I had always thought were odd before, but seeing them now in widescreen, they were made more clear, because before there were parts of the scene missing since it was cut into full frame. And the film itself at times comes off as being gritty, especially in the New York sequences, and again, seeing them on VHS only made them grittier. But seeing them in digital form and in widescreen, well they just popped and looked so much better. McTiernan's camera work does wonders for the film and proves yet again that he's a master at shooting action sequences, even if most of them are highly exaggerated, which of course was done on purpose. 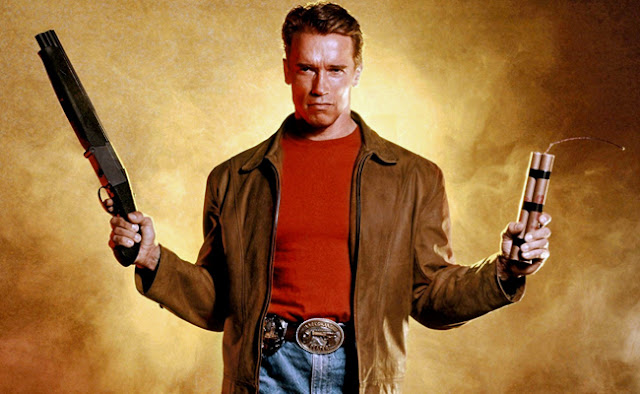 The best parts are obviously the moments within the fictional Jack Slater IV movie where everything is dialed up to 11. But the sequences that take place in the real world, though much more gritty, also offer up equal amounts of entertainment. In fact, there's never a dull moment to be found, never a time when my eyes wandered towards the clock to see how much time I'd already spent watching this. In fact, even though it clocks in at a bit over 2 hours, it just didn't seem long enough. McTiernan and co-writer Shane Black fill the film with so many nods to other classics (most outside of the action genre) and inside jokes that my wife was just having a blast, especially with the running gag of F. Murray Abraham (a co-worker of Jack Slater on the police force in Jack Slater IV) and the fact that he killed Mozart in Amadeus, which just happens to be one of her all-time favorite films. And that right there was just one of many clever tongue-in-cheek moments that make this one a bit refreshing. The endless barrage of killer cameos also add to it's appeal.

The phrase I keep hearing over and over is that this was "ahead of it's time", when describing why it didn't do well at the box office. When you watch it now, it's just a great film in general, even if you don't like action films. It's funny, clever, entertaining, and the action certainly delivers by the truckloads. But again, I have to wonder, would it have been more successful had it come out today? Though it's a film we've had many years to revisit and digest, my gut still tells me that it would not, especially today, where the film industry seems more and more fickle and harder and harder to generate a legitimate hit, especially with the skyrocketing costs of making films today. I feel that this film is still too clever and too original for it's own good to become a box office hit in the theaters, mirroring it's lukewarm reception when first released 24 years ago. And what makes it even more mind-boggling is the fact that nearly everyone involved, director John McTiernan, writer Shane Black and star Arnold Schwarzenegger, were all in their prime and at the top of their game. What are your thoughts?

Last Action Hero has only aged considerably well over time. Though I've seen it numerous times over the years, it wasn't until seeing it as a 41 year old adult that I really, truly appreciated it and understood everything it was attempting to achieve, and succeeding in spades. Outside of that mindset, it's also just an incredibly satisfying action film made at just the right time and delivering the goods tenfold.
Posted by robotGEEK at 12:18 PM