Recently my wife and I have had continuing conversations about which is the better film, Poltergeist 1 or Part 2. While I do really love the sequel, I've always been a bigger fan of the first film for a number of reasons, where my wife is a bigger fan of the sequel. So then we get into a spirited and comfortable debate about why our pick is better than the other. We've had this discussion so many times in fact that we decided to revisit both of them just this past week to finally get a fresh perspective on it. So let's dig in.

Being the age that I am, which means I was a kid when they were first released in the 80's and watched them quite often, even up until now, I can honestly say I've probably seen both of them well over a hundred times each, and each time is just as entertaining as the last. But it wasn't until this past week, when I really had to study them and take note of the very specific elements that they both had to offer, that I figured out what made each of them so great and special individually. 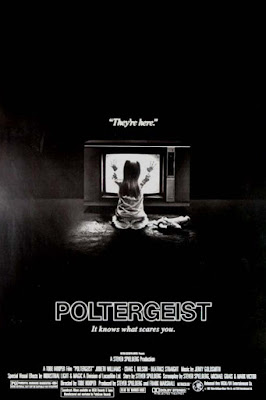 With the first film in the franchise, I've always been drawn by it's visual aesthetic. That's the main thing that draws me in every single time with this one. I know, the debate can go on forever as to who actually directed it, Tobe Hooper (credited) or Spielberg. I've read every single article, interview and behind the scenes stuff I could find on the subject, and there's still no clear definitive answer. You can ask two different actors who were on set and worked most days of filming, and you'll get two different answers. So I don't know if we'll ever truly know. But, knowing both of their particular styles and skills really well, my feelings are that Poltergeist carries equal parts Hooper and Spielberg, neither being more dominant than the other. Not only that, but it also displays the best of what each director has to offer. There are moments that feel pure 80's Tobe Hooper, and then there are moments where this film is pure classic Spielberg, and that's absolutely fine with me because in the end, this combative collaboration between two powerhouses produced one of the most iconic, visually stunning, commercially successful and entertaining ghost stories ever.

While this first entry offers up a lot of memorable elements like the excellent casting, score, time period (1982!) and it's story, for me it's the films specific visual tone and it's outstanding practical effects work. Few films leave this kind of impression on me and this one always has, even as a kid. It's as if the very best of both Hooper and Spielberg's directing sensibilities collided at the peak of their creative careers, with Spielberg just coming off of E.T. (his most visually stunning film to date), and Hooper transitioning towards more visually impressive films like Lifeforce and Invaders from Mars just a few years later. 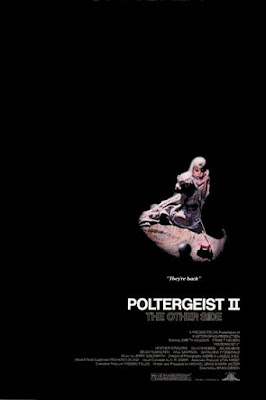 Outside of my feelings that the character of Reverend Kane is hands-down one of the most eerie, most iconic and most unsettling characters ever put to film, I never put much thought into the film itself. I liked it, but other than Julian Beck's incredible portrayal of Kane, nothing ever really stood out about it to me. But that never stopped me from revisiting it often throughout the years. Because even so, it's a very good film.

Revisiting this one recently made me understand just how good this film really is. In fact, I've come to realize that it's just about as entertaining as the first film, only in a completely different way. While the first film has a more slow buildup, focusing on the family dynamic before moving into the ghost story aspect later, this one is much more darker and feels more like a true blue horror film compared to the first film right from the beginning. The film set's it's dark tone early on and never lets up as it builds to it's climax that never really deliver's on it's full potential, yet stays true to it's tone.

What easily gives the film a lot of it's character is how director Brian Gibson chose to shoot it. His no-frills approach delivers a solid "dark" ambiance to the already moody atmosphere, and it perfectly compliments the film. Sure the first one was a much prettier and more stylish affair, but this one delivers the goods just as effectively, only in a much  more subdued manner. Poltergeist II possesses such a dark unsettling tone compared to the first film that it's often considered a standout when it comes to sequels and a lot of people's personal favorite in the series.

It took me long enough to come around and truly appreciate this excellent sequel. I guess I always had, but I never really thought of it as an important one until now. While not as flashy as it's predecessor, it contains other elements that makes it equally as engrossing and entertaining. We just won't talk about the third one...
Posted by robotGEEK at 1:29 PM