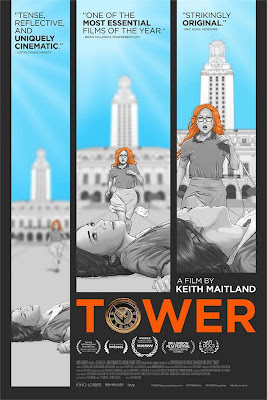 Netflix began offering this a few weeks ago, and I don't know how or where I heard of it or read up on it, but I somehow knew it was about the Austin, TX sniper shooting from back in 1966 before even seeing the cover art or a single image. I live in Texas, and lived in Austin for a time years ago, and this story is steeped in our history and subconscious, even if you're a kid. You've just "heard" of this because it was one of the first of it's kind and it's such a harrowing story.

As a documentary, Tower is really good and riveting. But what sets it apart from the crowd is how director Keith Maitland let's the story unfold, and in all honesty, I hadn't seen a documentary presented in this way before. He uses animation and voice actors to recreate the events, and then mixes in vintage footage and new interviews with the actual people who lived that ordeal, who were actually there that fateful day 51 years ago, and it's in this unusual way of telling the story that captivates you.

I'll admit, it took me a little while to get used to it, because I didn't know it was going to be animation, and initially, that's all you see. I thought it was a documentary, and it is, and it does eventually begin to incorporate real footage from that day as well as new interviews. Even so, once you get used to the story being told through animation, it grabs you and becomes highly engrossing. It's a clever and inventive way of telling the story through the eyes of those who lived it, and this ranks as one of the strongest documentaries I've seen in a while.

How to watch it:
Netflix is currently offering it, and you can purchase it directly from it's official website at www.towerdocumentary.com. 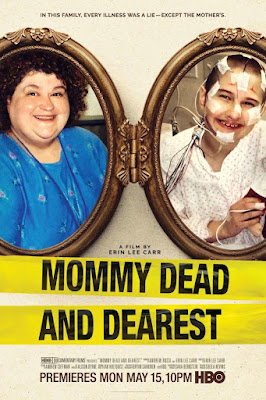 Here's another fascinating and disturbing documentary about a murder case that is as riveting as it is mind-blowing. Unfortunately this is one I can't divulge too much on as it will spoil the surprise and many twists and turns this story takes. So unless you're familiar with this case, it's best to go in cold, which is how I went it. I knew nothing about this story, which surprises me since I'm a news junkie, especially when it comes to crime stories. Yet somehow this one flew right under my radar and what's even more surprising is that this is fairly recent.

But trust me when I say that this story will kind of blow your mind. 20 minutes in and the twists and turns this took really caught me off guard in the best possible way, and I highly recommend checking this one out.

How to watch it:
Unfortunately at this time this one is a little harder to get to. It was an HBO production, and premiered on their channel. You can watch it only through HBO on one of their apps, which I know is available as an extension through Amazon for an extra fee. If you have HBO, you're in luck. If you don't, it will be a bit tricky, but well worth the effort.
Posted by robotGEEK at 7:57 AM