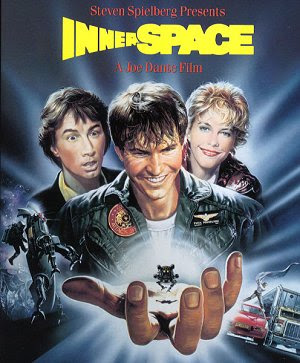 Innerspace was an interesting experience in that I doubt this film would have been made the same way today. Revisiting it so many, many years and decades removed from it's original release showed me how hard it would be to even categorize this. While it's clearly a comedy, it's not actually funny. Much like comedies from this time period, you know that technically on the surface that's what it's intention is, yet you don't actually laugh. It's lighthearted enough to justify calling it a comedy, but nothing in the film actually elicits a laugh. To me, it felt more like a thriller than anything, and that's one of the things that surprised me about this highly engrossing and entertaining film more than anything.

Directed by Joe Dante between Explorers (1985) and The 'Burbs (1989), Innerspace came out in a very incredible year for film in 1987, which ultimately was a bad thing, depending on how you look at it. If memory serves me well, I recall it not doing well and kind of getting lost in the crowd of big films like Predator, Lethal Weapon, The Lost Boys, The Untouchables Evil Dead 2, Beverly Hills Cop 2, Robocop and so on. However, it did contain quite a number of memorable elements about it. For starters, the effects work is pretty remarkable. So remarkable in fact that I specifically remember Innerspace actually being nominated for an Oscar for it's visual effects work that year, ultimately winning that award. And then there's the cast, who really shine here, but none more than Martin Short. If there was ever a movie that perfectly captured his very specific and unique brand/style of physical comedy, it's Innerspace. Short is a marvel as he literally uses his body as a tool to movie the film forward, the way an action star would do it in an action film. Yet, here in this film, it's not very different. Whether the role demanded it or not, Short thrusts his body head-first into the action and I constantly found myself amazed at his physicality, either when he's trying to be funny physically, or in moments like when he's dangling from the back of a high speed delivery truck and manages to land onto a moving convertible mustang, still standing. It's crazy, and I still can't figure out how they did that.

Then there's the lovely duo of Dennis Quaid and Meg Ryan, but I don't need to go into that do I? Needless to say they met on this film and were married for 10 years. But one big surprise for me was having Vernon Wells in this as a hitman who never utters a word and uses a snap-on style hand for weapons, which rules, making him arguably the coolest character in the film. But as it's a Joe Dante film, you've got a healthy dose of cameo's and regular's like the one and only Dick Miller for example. 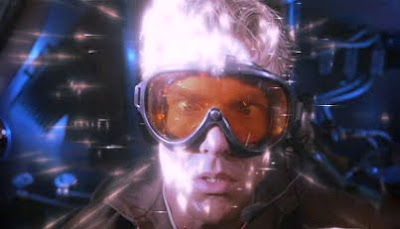 Though released on Indepedence Day weekend, tragically Innerspace got little promotion and little attention, resulting in a dud at the box office. I can only guess that maybe the studio and marketing department just didn't know how to market it since for a comedy, it isn't funny, yet for an action/thriller/adventure, it's hard to push one starring a comedian who just appeared in Three Amigos! the year before. Yet that's why this film works as well as it does. It's full of the unexpected and the un-definable in a very unspecific 80's way. Not being "laugh out loud" funny doesn't take away from your enjoyment of this immensely entertaining action/adventure/thriller and it contains just enough lighthearted moments to make you believe that it is in fact a comedy, even if it doesn't feel like one for the most part. It's pure 80's nostalgic entertainment at it's best. Just the effects work alone will blow your mind, but if you pay attention, there is so much more this film has to offer, so many things going on below the surface that makes this a wholly unique viewing experience.
Posted by robotGEEK at 2:32 PM