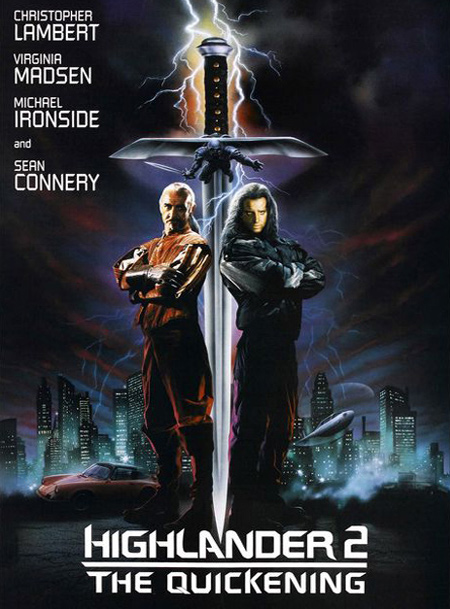 After having not seen this film since it's original release and being appalled, I decided to revisit it recently when I came across it on Hulu. I, more than anybody, was shocked to discover that believe it or not, I actually enjoyed this way more than I expected to. I know, I can't believe it either. When it was first released, I hated it. And then when they released The Renegade Version to try and fix a lot of the complaints (mainly the ridiculous idea that they were from another planet), I still didn't like it. In the end, it didn't really do what it set out to do, which was fix the film as a whole and calm down a lot of the die hard Highlander fans who went berserk.

So here I am, 20ish years later finally revisiting this and having a great time, only this time I decided to tell myself this wasn't a Highlander film and went into it as a standalone film. A weird sci-fi/action/fantasy film that really doesn't make a lot of sense, but packs enough action and visual eye candy to pass as an enjoyable weird hybrid that shockingly works. For me anyway. If you follow the film franchise, then you know they've just flat-out ignored this film completely. It doesn't exist in the Highlander universe anymore, and for good reason. As a Highlander sequel, it's absurd, ridiculous, and just plain stupid. I think we can all agree on that. What's shocking is that it's written by the same guy who wrote the first film, a film that has become a huge cult classic, and deservedly so. I have no idea what the fuck he was thinking when he wrote this film, which completely contradicts any of the lore of the first film. It's so odd. Ultimately it's a film about the environment and a dome MacLoud built to protect the planet Earth's ozone layer. I don't want to get into all the specifics about it, but that's essentially what the bulk of the film is about.

Another interesting bit is that director Russell Mulcahy hadn't directed a film between the first Highlander film and this sequel. That's a whole 5 year gap. But in this same year (1991) he had also directed the excellent and severely underrated cop thriller Ricochet, a personal favorite of mine. So you can say 1991 was one of his strangest years as a filmmaker, having directed one of his most celebrated and one of his most hated films both in the same year. That doesn't happen a lot.

While watching this highly enjoyable oddity, there were a number of things that immediately stood out for me. The first being that Mulcahy's visuals are in top form here. I found a lot of references to his first Highlander film littered throughout, but he also utilized a lot of his ever-changing style that he used in Ricochet. It's a much darker, more slick visual aesthetic that comes off way more professional than a lot of stuff he's done in the low-budget circuit. I found a lot of visual eye candy and production design that look like they came right out of Dune and Dark City. I'm talking big and vast. Not the sort of thing you'd see now with the power of visual effects where they would just create all that background in post. Here it's all really there and it's damn impressive.

The second thing that stood out was that the action sequences were pretty badass. There's a sequence in the first act where they do one of those "hoverboard" sequences that failed so miserably in Masters of the Universe just a few years earlier, only here they actually pull it off with nothing but practical effects and stuntwork. I was rather surprised at how well they pulled it off honestly. No green screen, just pure old fashioned wire-work and it's surprisingly awesome. And there are other highlights, like a sequence with MacLeod and Ramirez driving through a checkpoint and getting shot all to hell. Ultimately, it's got better than you expect action sequences and that's always a plus.

I don't know why it's called The Quickening, because that doesn't really play much of a part in the story. I mean, you expect there to be some history on the whole Quickening thing, or maybe have that play a part of the story, but no. It's just a title that for some reason, was thrown in without any explanation, much like the entire film in general.

I can't stress enough how much this film surprised the hell out of me. I was not expecting that. It still doesn't work in the Highlander universe, but man, as a weird hybrid film, it's pretty badass if you just accept it for what it is. It's dark, it's violent, it's got plenty of action, with Michael Ironside playing one crazy heavy metal-looking villain that easily outshines most villains in recent memory. It's pertty to look at, while dipping into so many different genre's. Most of all, it's fun. Time for me to grab the bluray of this.
Posted by robotGEEK at 2:21 PM