Highlander 3: The Final Dimension; A Lame and Tedious Low Point in the Film Series 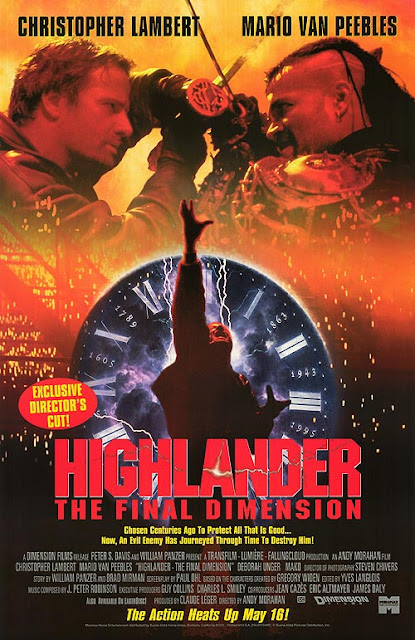 After revisiting part 2, and frankly loving the shit out of it, I decided to keep going in the franchise. Truth be told, as much as I hold the first Highlander in the highest regard, after part 2, I never bothered seeing any of the numerous sequels. In fact, I'm not really sure how many of them there even are as of this writing as they don't go by Highlander 2, 3, 4 and so on. Instead they go by titles such as Highlander: Endgame and Highlander: The Source. Not that it will take that much effort to figure out what order they go in.

First up, Highlander 3, or Highlander: The Final Dimension as it's known here in the states, or Highlander: The Sorcerer as it's known elsewhere. I remember being pretty excited about this one when it was announced because after the initial disaster of part 2, we all were hoping for something more in line with a straight-up sequel to the original. I was also excited because this would be the feature film debut of director Andrew Morahan, who had done a few of Guns n' Roses epic videos back in the late 80's on into the 90's like November Rain and Don't Cry. I always felt he had a great visual eye (in the confines of a music video anyway) and couldn't wait to see what he did with the franchise and his first shot at a full-on feature film. But then I began seeing trailers and well, my enthusiasm took a nose dive and I never made the effort to go actually see it. It just didn't look very good, or exciting, or even competent in the sense that it looked low-budget and nothing that looks like it should be playing in your local theater. I took that as a sign that the franchise was dead in the water, and so I ignored it and never bothered with any of the others, not even the television series.

Connor MacLeod has been living a peaceful life thinking that he is the last of the Highlander's. When an old foe in the form of a samurai warrior/magician escapes from his tomb after 400 years, he seeks to take revenge on MacLeod for putting him there.

Finally sitting down to watch this my initial feelings were pretty much confirmed. Highlander 3 is frankly mediocre in nearly every single department. There's nothing about this that stands out, and there's nothing about this entry that warrants a repeat viewing. It's pretty bland to be honest. His talent for directing video's sadly doesn't transfer over well to feature films, and sadly, I found Highlander 3 to be a bore for the most part, with even the fight scenes being tediously lame. Honestly, the only highlight for me was Mario Van Peebles as the villain, but even then, he was nearly a rehash of The Kurgan from the first film, only changed somewhat to be a black samurai? I think.. I don't know,

Again we're treated to flashback sequences, and again they're as dull as they were in the first film. I love the first Highlander to death, but man those flashback sequences always killed the momentum for me. At least the second film decided to do away with those completely. But this film often tries too hard to replicate so much of what made the first film work so well that it almost feels like a remake. I mean, they even have MacLeod return to New York City, and funnily enough they dress him exactly the same way he was dressed in the first film. There's even a scene with Kane (Van Peebles) doing a crazy driving sequence with his victim, MacLeod's son, just like Kurgan did in the first film. How did either of them learn how to drive?

Andrew Morahan is no Russell Mulcahy, but he does try his hardest. It's just not enough. The visual's don't pop and nothing flows. There are moments where something "works" and "hits the right note", only to be surrounded by uninspired camerawork that looks like it was a Made-for-TV production. The action is a bore, and there's never any real excitement. I'm not surprised that it took them another 6 years to finally get the nerve to make another one. I'm actually surprised they even tried. Highlander 3 is just kind of ....... there. It's not terrible, but it's not memorable. It does play out like a true sequel though, totally ignoring anything that happened in the second film. It references that first film so much that you'd think they were doing a remake, and in that respect, it just comes across as tired. I guess with this one they decided to play it safe, but in doing so, they seriously dropped the ball, created a mediocre film at best, one that will leave no lasting impression.
Posted by robotGEEK at 12:47 PM