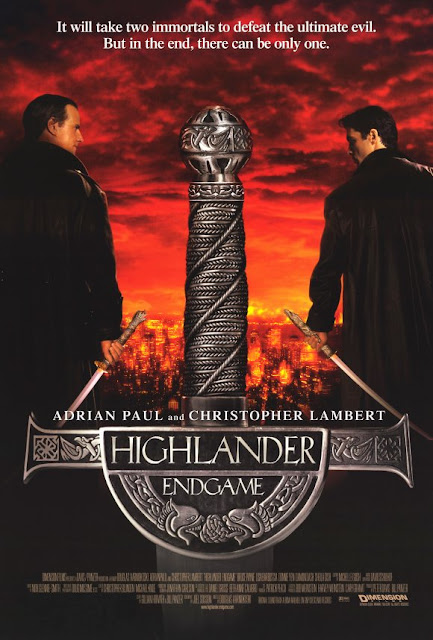 With Highlander 3: The Final Dimension, the filmmakers gave us a straight-forward sequel to the original film, bypassing the absurdity of the second film (which I still happen to love). Except Highlander 3 was largely unmemorable and uninspired. So I went into this one with some trepidation, not even really knowing what the cast or filmmakers consisted of.

Verdict? Highlander: Endgame aka Highlander 4 was a blast. Legitimately. While it looks and feels on the low-budget side, it somehow works, and really well in that specific low-budget hyper stylized action kind of way, just the type of film I happen to love to death. Having not seen the Highlander series, this was the first time I'd seen Christopher Lambert and Adrian Paul together. I know Lambert kind of showed up for the pilot, but I don't know what direction that storyline went. Here MacLeod (Lambert) takes over the role of mentor the way Sean Connery did in the first 2, and in doing so, he kind of overshadows and outshines Adrian Paul's Duncan MacLeod character. I'd read that Lambert was supposed to have just a small part, but the end result looks more like a co-star lead, and ultimately steals the show. Not that Adrian Paul is any less entertaining as a lead. I'd never seen him in anything, so this was my first introduction to him, other than a random guest spot on an episode of Seinfeld, and the guy delivers the goods as a MacLeod. I think part of what sells it is his immense physicality to the role. For the most part, you know it's him doing some of that crazy swordplay and stuntwork, where as you know Lambert was so blind without his glasses that it was a constant struggle.

For me, one of the first things I noticed when compared to the lackluster part 3 was that visually and aesthetically, this one looks so much better. Again, not knowing who directed it beforehand, I was surprised to learn it was none other than Nurse 3D's director Douglas Aarniokoski's first film, after having worked as an assistant director on a huge number of projects big and small, starting with Pee-Wee's Playhouse and eventually working his way onto films like From Dusk Till Dawn, Austin Powers and Resident Evil:Extinction. He seems to be relegated to television work these days, and in all honestly I was not a fan of Nurse 3D, but here the guy delivers the goods. There's some really great camera work, compositions and camera movement going on throughout, and most surprising of all, it's bloody and violent as hell. When someone gets cut or sliced, it's almost always followed by a frenzy of blood flowing through the air. And none of that CGI crap either. Nothing but good ol' fashioned squibs and blood packets were used and it's fantastic. So there, right off the bat, Highlander 4 is way more stylish and way more violent and bloody than I was expecting. We're off to a good start here.

Have you noticed I rarely ever include a synopsis of these films? Do I really need to? Nah. I mean, they all basically follow the same formula right? MacLeod learns of yet "another" lost and forgotten immortal he must fight and kill because if an evil immortal remains the last, then the world turns to shit.

Aside from Adrian Paul and the return of Christopher Lambert in the role that cemented his cult status, the supporting cast in this is quite good and dare I say.....awesome. First off, we have Bruce Payne as the main villain. Really, he's about one of the best villain actors out there and while the thought never occurred to me that he could make a great villain in this particular franchise, when I saw him it put a HUGE smile across my face. When Payne is a villain in a movie, it automatically elevates it's status. Have you seen him in One Man's Justice aka One Tough Bastard? If not, I highly recommend you do that right this minute. Moving on. As the film progresses, they throw in Donnie Yen, and some other familiar faces and I've got a huge grin on my face. This film just kicked up a few notches of awesome.

The purpose of this Highlander entry, it seems, is for Christopher Lambert to pass the torch to Adrian Paul and let his Duncan MacLeod character continue the film franchise. Sadly, things didn't quite work out that way. Endgame ended up being the last good Highlander film because it's follow-up Highlander: The Source was quickly and universally panned, and remains the most reviled out of the franchise. It was so bad that they never made another one after it's release in 2007.

I must be honest. I wasn't expecting to have such a good time going through these films. I've always loved the first film and since I was a kid, it's always been a favorite and one that I revisit constantly with every new DVD or Blu ray release, which I always end up purchasing. I guess my love for it prevented me from "possibly" souring that love with some bad films and while yes, technically a few of them are not so great, I'm still glad I made the effort to watch them because despite some of their shortcomings, I did enjoy the experience in some form. I'm nervous as I head into 2007's The Source, but maybe it's not as bad as people say. To be continued...
Posted by robotGEEK at 12:41 PM