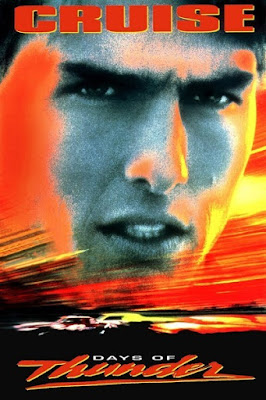 This is probably the one and only Tony Scott film I never got around to watching. Though I generally love his films, and was pretty sure visually it would be impressive, just the idea about a drama about stock car racing never inspired much interest in me. But after having seen MI: Rogue Nation, I guess you can say I got in sort of a Tom Cruise kick, with plans to check out MI 2 - which I never got around to seeing - and revisiting Minority Report. But I had seen this particular Cruise flick hanging around Netflix for months and decided to just give it a shot.

I've often said that 1990 is the best year in film. So many of my favorite films in every genre were made in 1990; it really was a very special year for film. Unfortunately, Days of Thunder is not one of them. Made 5 years after their breakout and massive success of Top Gun, director Tony Scott re-teams with his star once again for another drama, hoping to capture lightning in a bottle twice, this time centered around stock car racing. One of the first things blatantly apparent is just how cheesy this film is. I mean, when Tom Cruise makes his first entrance, it's epic. Here's how it goes. They're discussing Tom's character Cole, on a race track. When one of them asks "Well where is he?", the cheesy guitar music cue's, and Cole comes riding through a random wall of smoke on a motorcycle wearing a trenchcoat and sunglasses in slow motion. Fucking epic I tell you. If only the rest of the movie was this entertaining.

While Days of Thunder displays director Tony Scott's amazing ability to capture breathtaking scenery and action, the fact is that the film as a whole is anything but interesting. For me personally, the fact that the character Tom Cruise plays, Cole Trickle, is just so damn unlikable for every second of the film really hurts the film. He really is. He's arrogant, selfish, cocky, and moody with a hot temper. Nothing about his personality emits any kind of sympathy or emotion from you other than knowing right up front that this guy is an arrogant dick. It would have been such a different movie had he been more likable, or even sincere. And what kind of shocks me is that there is never a single moment, not even in the end, where he redeems himself with an act of kindness, that he totally redeems himself because when he does ultimately agree to help a bitter rival out, it's really just to get back in the race car after it was painfully apparent there was no other way he would. It's all for selfish reasons.

Hanz Zimmer is credited for the score, and I'm not sure what the directions were from Scott or even the producers, but it is so cheesy, so patriotic, and so overly tacky that it kind of feels forced, and hurts the films overall vibe. I'm not totally convinced that a more subdued score would have helped the film overall, but it would definitely be better than what is currently present.

Tony Scott is hands down one of my favorite directors of all time. Nobody has, and probably never will be able to duplicate his very specific aesthetic. He was a one-of-a-kind tour de force in the film world, delivering some of the most breathtaking, exciting, and downright stellar films in the action, comedy, drama, and thriller genre's of the 80's and 90's. His imprint will be admired for generations, and that's not something that can be said about a lot of filmmakers. Days of Thunder is really just a slight speed bump in his career, because the same year he delivered one of his best films ever with Revenge, and then went on to direct The Last Boy Scout the following year, followed by one of his most important films 2 years later with True Romance in 1993. That reminds me. I need to revisit True Romance again. It's been too long.
Posted by robotGEEK at 11:43 AM