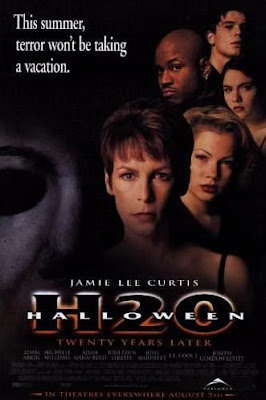 Exactly a year ago I set out to revisit the entire Halloween franchise from beginning to end in order; The Halloween season always does that to me. But after being underwhelmed by Part 4, being annoyed as fuck and just flat-out hating Part 5, only to be left somewhat unaffected at all by Part 6, I pretty much just gave up completely. It's taken me exactly a year to come back to the original franchise, outside of Rob Zombie's Halloween films - which I just love - to finally get around to revisiting this entry, which I only saw once in the theater and remember absolutely zilch about. That's never a good sign.

Let me start off by saying that I've never been a fan of director Steve Miner. I honestly can't understand the love for the guy. Sure he's mostly known for having directed Friday the 13th Part 2 and 3, as well as helming the 80's horror/comedy cult classic House and Warlock, but even when you look at those films, there's nothing really special about them. There's nothing about Miner's ability as a director that makes him stand out among any other paint-by-numbers director out there. Yet somehow his name is always remembered. The films listed above are his only horror efforts, as he's mainly stuck to drama's and television work. So when he was announced as the director for H20 way back when the film got greenlit, I was anything but excited. And you know, I guess my feelings were pretty spot-on because as I said, I don't remember a single thing about this film other than Myer's head getting cut off in the end. So as I sat down to revisit H20, I actually hoped for the best.

I'm more surprised than anyone to admit this, but while not great, or even very good for that matter, I found H20 to be far more competent than a few of the last entries, making it somewhat a better experience than I had anticipated. From a franchise standpoint, it's not a bad film overall. Sure the poster art is uber lame and tacky, and once again, Miner's direction and vision is as bland as I feared, but structure-wise, it's in keeping with a story set 20 years after the fact and logically, some of it makes enough sense.

While the entire first half is a tad tedious in introducing us to all the new characters, as well as getting us caught up with Laurie Strode (Jamie Lee Curtis) and what she's been up to since her brother tried to kill her all those years ago, it's really the second half where H20 really comes to life and turns into an all-out slasher, which is what we really came to see isn't it? Except, director Miner films everything with such a bland palate that you can't help but think how much more exciting it could have all been on a visual level had someone else, with a much more visual flare, had been in charge. What's frustrating is that there are a few scenes scattered throughout that surprised me - scenes that implore some impressive camerawork, only for the majority of the film to fall back to lazy handheld steadi-cam work. Watching the special features located on Scream Factory's massive blu ray set, it seems the DoP really set out to make something visually striking in widescreen. I mean, he feels like he did with the end result, but I didn't get any of that by watching it. Even the now classic scene of Laurie coming face to face with Michael through a small round window in a door for the first time in 20 years is treated in a rushed manner, with handheld shaky camerawork, where it would have had a much stronger impact had it been better orchestrated with some stable camerawork. It carries a made-for-tv quality that is almost unforgivable, if Halloween 5 hadn't been so much worse. So in that respect, this isn't a total loss.

Jamie Lee Curtis tries really hard to play it tough here, almost giving you glimpses of Sigourney Weaver tough from Aliens. But it oftentimes comes off as just being mean, arrogant, and very condescending to pretty much everyone in the film. She's pretty annoying overall. But through lots of screams and tears, she does manage to physically fight and outwit Michael through most of the second half, culminating in the films seemingly "final" death of her brother by loping his head off with an ax. But of course, as well all know, producer Moustapha Akkad just couldn't let the franchise die, so we still, somehow, got the inevitable sequel after this, even though Michael got his head cut off. His son Malek Akkad, also a producer on the franchise, is at least forth-coming about some of the bad decisions made in the past in regards to these films, like stunt casting and such. At least he'll be the first to admit when they shouldn't have done something that potentially hurt the franchise.

I liked the stunt actor they cast for Michael this time around; Chris Durand. Tall, big and physically imposing, he's pretty much what you want Michael Myers to look like in a jumpsuit, unlike some of the actors they chose for entries 4, 5, and 6. The scene where Myer's lowers himself from a pipe hanging from the ceiling as Laurie walks past him is fucking killer, but again, loses much of it's impact due to lazy camerawork.

Not the disaster I was expecting, yet very unfulfilling as a slasher that set out to capture some of the magic of the first few entries decades earlier. With H20, it's made abundantly clear that the Halloween franchise is tired and needs a drastic overhaul up to this point, or to just be laid to rest. Of course we all know that didn't happen, with the release of Halloween: Resurrection 4 years later. Thankfully, Rob Zombie really did a remarkable job (personally speaking) rebooting the franchise with his 2 stellar Halloween films beginning in 2007. They may not be perfect, and even I have some issues with them, but you can't deny as old-school style slasher's, they're brutal as fuck and the closest thing we have to a solid entry in that sub-genre next to The Collection.
Posted by robotGEEK at 3:46 PM