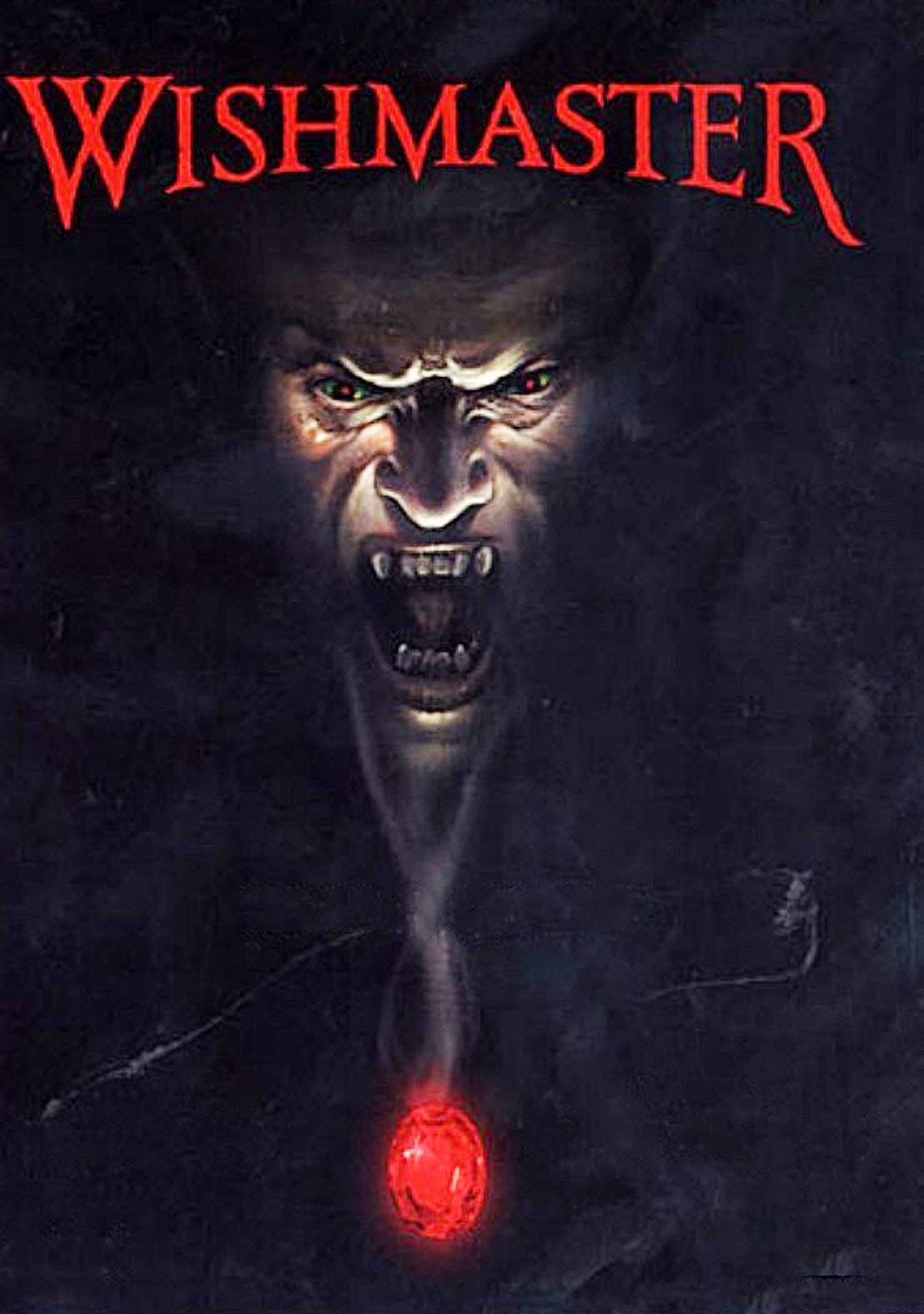 Surely by now, you've heard of the Wishmaster series. I do, but only had a vague recollection of it. Mainly I remember Wes Craven being a producer on it or something with the first one so he had his name all over it to push it into the mainstream a lot easier in hopes to reach a wider audience. I remember catching it once when it first hit theaters, but for some reason I don't remember if I liked it or not. Of course, when I really stop and think about it I suppose the fact that it didn't leave an impression on me should say something, right?

Well, my fears were unfounded because having sat down recently to revisit this one, I had a blast. Unknown to me, this film has a tremendous amount of talent behind the camera. I mean, it's insane. The one and only Wes Craven is a producer, but it's also written by Peter Atkins, who wrote the best Hellraiser to date with Hellbound: Hellraiser 2, you know, the one with all the best lines of dialogue and the most quotable? Then you've got KNB Effects Group guru Robert Kurtzman on directing duties, and doing a mighty fine job I may add, and Greg Nicotero pulling double duty as second unit director as well as makeup effects. But then you have Harry  Manfredini who's done most of the Friday the 13th scores as well as coming up with the theme song does the score here, and that's not even the eclectic cast with the likes of Kane Hodder, Angus Scrimm, Ted Raimi, Tony Todd, Robert England and of course, the one and only Andrew Divoff as the Wishmaster himself--who just seems to be having a blast with this role.

For me personally, it just seemed like all the right ingredients were here for this one. As a horror film, it's not really scary--what horror films are these days--but it's a helluva lot of fun, and that's always #1 in my book. It's also made considerably well, considering Kurtzman as a director had only made one other film before this with 1995's The Demolitionist. It's even more surprising, or sad I should say, to learn that he hadn't really done much as a director since this one, with only 3 other films (all low-budget) since this film in 1997. It's really a shame. I haven't seen any other film he's ever directed other than this, but basing my judgement solely on this one effort here, I'd say he's definitely got some talent behind the camera. Either he has no desire to work as a director or he hasn't been given the opportunity to continue to hone his craft; I'll never know. One thing I do know though; he knocked this one out of the park. I have the same feelings for Clive Barker. The dude's only ever directed 3 films in his entire career, and each one has left a long-lasting impression on me. And it seemed that he only got better with each film, yet since 1995 he hasn't directed anything, not even as a director-for-hire, which seems so odd to me. How can someone with so much talent make 3 amazing films in a row and then nothing for 20 years?

But anyway, I'm getting off track here. For fans of old school make-up horror, this one is about as good as can get. Unfortunately the same cannot be said about it's many sequels, but you'll definitely have a good time with this one. Yea, there's some pretty infant looking CGI, but it's also got a ton of practical effects work, and that's where this film really shines. Yeesss, some of it is really cheesy, but that doesn't mean it's any less fun or entertaining, right? And guess what? It gets even better. This, along with all of it's sequels, are currently streaming on Netflix right now.
Posted by robotGEEK at 1:54 PM