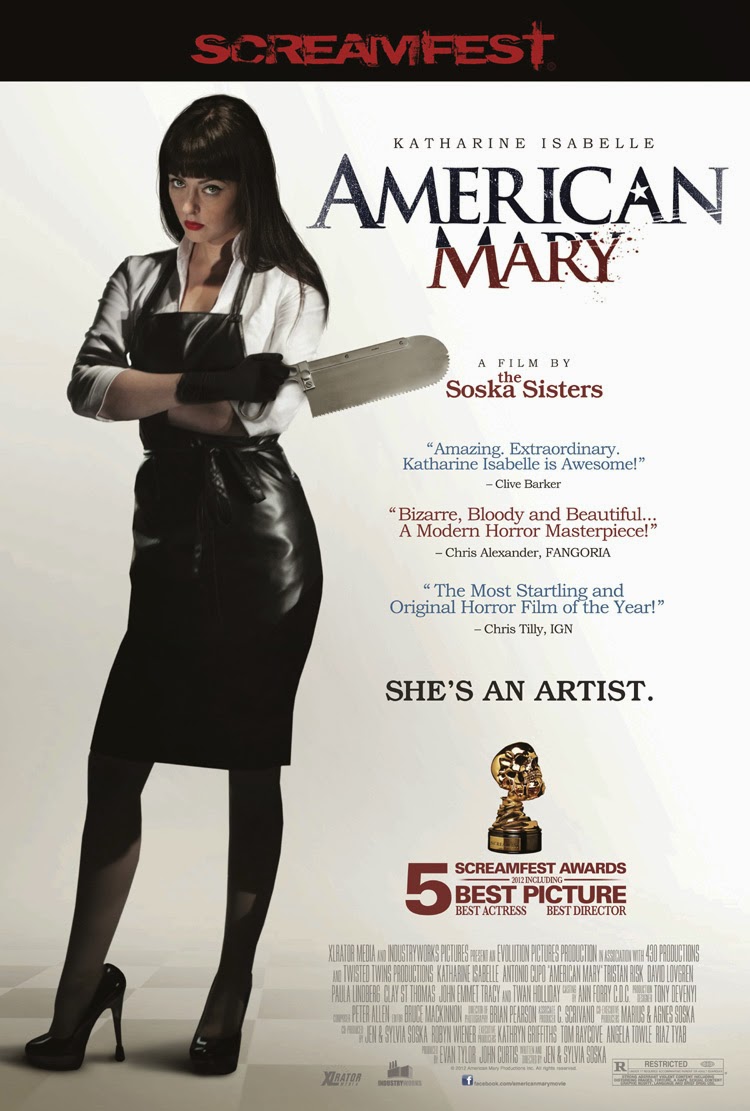 I was a little hesitant about this one. I'd seen it at my one and only local video store and for some reason, this cover always made it look like some kind of documentary to me. And the title, while misleading when put into the context of the film, didn't grab me. Yea the cover is a picture of a hot chick wearing an apron holding a hacksaw, but there was something too artsy fartsy about it all. At least some international posters were more gruesome. This had also been in my Netflix queue for months before we finally decided to sit down and watch it the other day when we couldn't find anything else to watch.

Right off the bat, I'll tell you American Mary has both good and bad points. On the plus side it's a well made film; nice camerawork with a sleek visual style. Not sure if it would be categorized as a horror film though or just a thriller because while I guess technically they were going for the horror genre, there's nothing really scary about it and even when you take into account what the subject matter is, the graphic violence (of which you'd expect there to be a plethora of), is pretty minimal. But the film is stylish and looks good. So it'll always have that going for it. On the flipside though, while the film as a whole looks good, it's seriously lacking in a lot of areas. For example, it's rather slow. And while a big part of the film is the subject of body modification, they never really explore it to the level that they should. You just feel that they could have gone so much further with that idea. There's a sequence in particular that comes to mind. I'm sure had they put a little more thought into it, they could have put together a montage of real body modification enthusiasts in some way. It's a rather large and dedicated community. I'm positive any one of them would have been happy to contribute some screen time for that. But alas, that was not to be. And I'm still not sure what the title "American" Mary means. Maybe it's not meant to mean anything.

Another positive attribute to this experience is the cast. Katherine Isabelle, who stars as the titular Mary, is sexy as hell, constantly teasing us with some "almost" nudity, but never actually going there. Bummer. Apparently, she's Ginger from the Ginger Snaps films, which I have never actually seen. So she's kind of already well known in the horror community, as are the films twin sister writer/directors, the Soska Twins, who also make an appearance in the film, as....you guessed it.....twin sisters looking for some body modification. It looks like this is their biggest film to date, having previously worked on a low-budget film called Dead Hooker in a Trunk and a bunch of shorts. But if they put as much care and technical detail in their future projects as they did with this one, then I'm looking forward to what they have to offer us.

Overall, not a bad effort. It's visually a nice looking film and when it eventually does offer a few small doses of violence, they're nicely done. It just seems that it never quite reaches the level it could with the subject matter. Sparsely violent or even shocking combined with it's slow pace and sometimes confusing editing choices hinder it's ability to leave a lasting impression.
Posted by robotGEEK at 2:01 PM