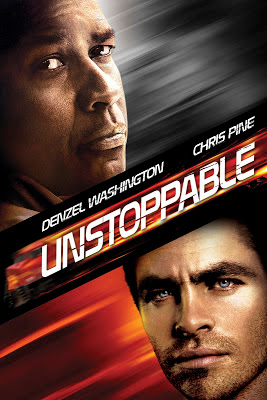 The only reason I gave this film a shot was because it's directed by Tony Scott, plain and simple. While he hasn't matched his amazing output from the 80's or 90's, if he's attached as director, I'll watch it no matter what. Even knowing it could very well become a nausea inducing crapfest like Domino. But I always hold out hope.

Thankfully, Unstoppable is one of his better films from the last 20 years, but sadly his very last film before his untimely passing. In 2004 with the release of Man on Fire and then in Domino a year later, he adopted a new style of filmmaking, a new technique that every new filmmaker seems to be using these days, the hyper-active camera work and quick-edit gimmick. For Man on Fire, it wasn't so bad and actually worked in some scenes, but for Domino it just made me hate what has become of Tony Scott as a director. His subsequent films never got me to change my feelings. I had always hoped that he would have eventually gone back to his signature style that gloss over every Scott film, where you just can't mistake any other film for a Tony Scott film. Top Gun, Revenge, Beverly Hills Cop 2, The Last Boy Scout, True Romance; these are all examples of his best work as a visual filmmaker and his best films to date, in my humble opinion. 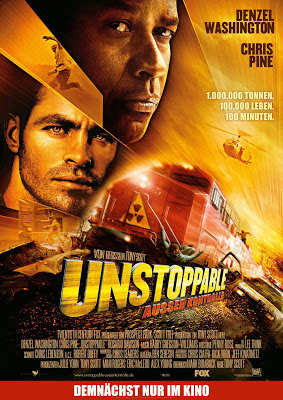 Unstoppable sees Scott returning to his former visual style for the most part. He does throw in a few quick edit scenes in there, but overall it's much more in tune with his former films style, which was a very nice surprise. And you know, I really enjoyed it. Yea it's a movie about a runaway train, but he makes it exciting and blows shit up and demolishes the way only he can on film. Denzel Washington doesn't even need to try anymore. He's just a natural at these kinds of roles and pulls off the older, wiser conductor with gusto. Chris Pine as the rookie on the job on probably the worst day of his life is fine, as are the supporting actors.

I would like to take a moment to bitch about something. Is it just me, or does every Tony Scott film these days suffer from the worst poster art? I tell you, they do nothing for me and are as lame as they come. Truthfully, I think the last poster art I actually dug from one of his films would have to be True Romance back in 1993. I mean, look at this U.S. poster up above? It's like no thought or care went into the design at all. Now compare it to this International poster here on the right. What a difference.

All in all, about as exciting as a film about a runaway train can be. With Scott's refreshing throwback to his older style of filmmaking, it certainly raises the entertainment value. Most importantly, it was thoroughly enjoyable from start to finish. Sometimes that's all you want. R.I.P. Tony Scott.
Posted by robotGEEK at 1:49 PM